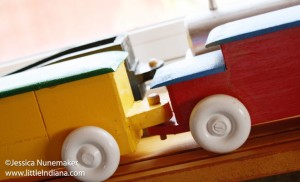 My husband, Jeremy, and I almost passed by The Grainry Country Store in Dale, Indiana.

This Spencer County shop was an unexpected find along a peaceful, hilly road.

I got to browse around the two week old shop near this small Indiana town. It’s a country store and flea market rolled into one! While I explored inside, my husband entertained the kids outside for a bit.

He had an easy job of it this time: the Grainry has animals! Chickens, goats, ducks, and even a donkey were all hanging out near each other, enjoying the shade of a large tree. While they aren’t a petting zoo, it was fun for the kids just to watch them milling around!

Inside The Grainry Country Store lies a lot of neat stuff! The owner makes and sells handmade furniture. I love the paint job on them! There are some fun, vibrant colors here and really nice pieces. 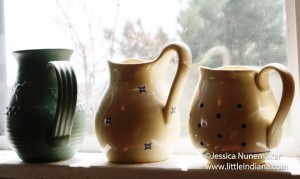 Looking for little things? There’s excellent vintage Pyrex, lanterns, Ball Canning Jars, decorative tins, and more. It looks like you can also plan on picking up fresh veggies (in season), here too. Great for those times you miss the farmers’ market!

I didn’t notice it at first, but the sign reads “Buy, Sell, Trade.” Is that fun or what?

The Grainry Country Store has a nice back-story that I think you will enjoy: It actually was a granary. Built back in the early 1950’s by the owner’s father. It stored all the grain from the 200 acre farm to feed the livestock over the long, cold winter. Would you believe that that until 1956 he did all the plowing with his two mules, Dick and Fanny?

Even though much of the land has since been divided up, they now possess the homestead where The Grainry lies. The part in the middle, where we happened to be standing at the time, was where the trucks drove through! As you can imagine, this old granary turned Grainry has a healthy dose of character. 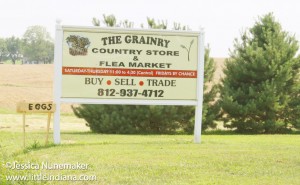 At two weeks old, this was a fun little place! I’m so glad we turned around and made it inside.

The Grainry Country Store will be your new “can’t miss” shop on the way to or from the small Indiana town of Dale, Indiana for sure!