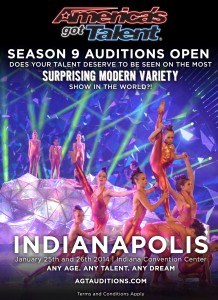 Have you registered for America’s Got Talent auditions in Indianapolis, Indiana this month?

Time is running out to a be a part of this uplifting show that features a huge variety of incredible talent!

For those of you unfamiliar with the hit NBC show, you may recognize a few of the celebrity judges that are involved with the show: Heidi Klum, Howie Mandel, Howard Stern, and Melanie Brown. Both judges and voters have a say in this one.

Now in its 9th season, everyone auditioning to appear on the show is looking for more than a few brief moments of fame but a shot at the big prize: one million dollars, payable in a financial annuity over 40 years, and a show as the headliner on the Las Vegas Strip!

So, they bring their “A” game! The big acts that involve sixty people or small, solo numbers. It may involve singing, dancing, gymnastics, or even animal acts. For the Indianapolis audition, animal acts to require special permission so be sure to fill out the required form online as stated.

Indiana Auditions for America’s Got Talent

It is open to any age and any talent. Kids aged 13 and under will need a parent to fill out the audition form for their child.

Auditions began October 26, 2013 in Miami, Florida. In addition to Indianapolis auditions to be held on January 25 and 26, 2014, other auditions will be held in cities that include Atlanta, New York, Denver, Houston, Nashville, Los Angeles, Baltimore, Providence, and Greensboro.

Not able to travel? Submit your America’s Got Talent audition video online.

I’ll be rooting for Izzy–a sassy friend with one heck of a set of vocal chords who plans on auditioning. Register for America’s Got Talent online before time runs out!