Scratchtruck owner Matt Kornmeyer is not “most people.” “Most people,” if confronted with job loss or a lay-off, wonder what to do next. But when Kornmeyer was laid off, he knew exactly what he was going to do: he was going to open a the Scratchtruck website. “Here I was, at the intersection of preparation and opportunity. One door was closing, but another one was opening. Since then I have slid all of my chips in the middle and present to you, Scratch.” 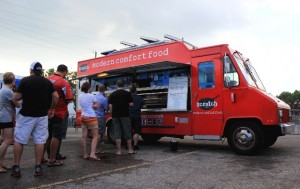 Scratchtruck hit the streets of Indianapolis in 2011 and specializes in modern comfort food. Their specials menu changes monthly, but it always offers a variety of hearty entrees.

Kornmeyer had always enjoyed cooking. His family encouraged his passion when he was a child, and he was later accepted to culinary school. The idea for Scratchtruck, however, developed after Kornmeyer visited Portland, a city known for its street food “pods” (small clusters of food vendors). “I was amazed at the food scene that was there and the crazy food being made in trucks/trailers/carts,” said Kornmeyer. “I would daydream about finding a way to bring what I saw, smelled and tasted in Portland to Indianapolis.”

Scratchtruck hit the streets in June 2011 and has found popularity over the last few years. In October 2013, Scratchtruck was included on The Vivant’s “50 Best Food Trucks in America.” Furthermore, Scratchtruck has a kiosk in Bankers Life Fieldhouse that serves up Scratch Burgers and Texas Cheesesteaks during Indiana Pacers home games. The truck’s popularity even encouraged the creation of an Etsy shop, where an 8 oz. jar of Scratchtruck’s signature bacon marmalade can be purchased. 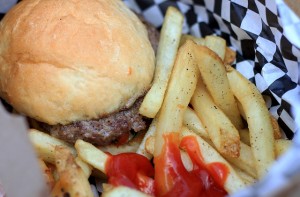 The Scratch Burger is topped with savory bacon marmalade, a sort of jam that can be ordered through Scratchtruck’s Etsy store.

The menu, which features several different entrees, also offers a variety of fries—there are the honey and feta fries, the hand-cut fries, and even the Poutine de Peru fries. Scratchtruck also offers different specials each month, though some items—such as the bourbon-braised brisket and lemongrass pork sandwich—reappear if requested. So when it came time to order, my dining companion and I had some difficulty selecting what we wanted to eat. We eventually chose to order separately and share openly.

Between the two of us, we sampled the Scratch Burger (which was mouth-watering and savory), the BBQ Chicken Cone, and two types of fries. I found that I preferred the hand-cut fries to the poutine, mainly because the poutine was almost rich, and almost too filling to finish. The entrees, however, were hearty and satisfying, and were easily complemented by our shared beverage—a cantaloupe sage lemonade. We found it to be refreshing, perfect for summer, and—truthfully—the most delicious-smelling beverage. 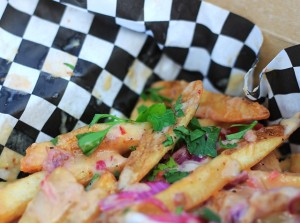 The Poutine de Peru Fries are one of the truck’s most popular dishes. Scratchtruck also offers other varieties of fries, including ones topped with a house-made harissa honey sauce and crumbled feta cheese.

“Highly recommend @scratchtruck if you’re in Indy. Bacon marmalade on the burger is stuff dreams are made of.” — @Tom_Bricker

“The bacon marm on the Scratch Burger is also the weirdest but most delicious condiment I’ve ever had on a sandwich. Basically, it is a meaty jam that you can put on a meat sandwich. Sign me up.” — Dana M. 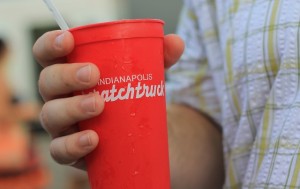