When Jude Dowell and his fiancée, Marla Tate, stumbled upon a 1975 Chevrolet Step Van, they knew it was the perfect vehicle. The pair had always known that they wanted to open their own business, so after Dowell graduated from culinary school, they decided to start a food truck.

The Step Van that Dowell and Tate purchased had only 10,000 miles on it, but it required other major repairs. To help with the cost of repairs and the purchase of restaurant equipment, they launched a Kickstarter campaign in 2013. The campaign proved successful, and after a soft opening last fall, Citizen Hash hit the streets in March. Though they’ve had additional struggles with the truck, both Dowell and Tate said that when they read a tweet praising their food, everything—from water heater issues to generator problems—is suddenly “all worth it.” 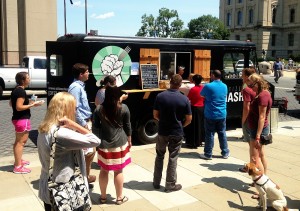 Citizen Hash was partially funded by a Kickstarter campaign launched in 2013. The truck has been on the streets of Indianapolis for only a few months.

When it came to starting a food truck, what appealed to Dowell and Tate the most was the truck’s mobility. In the duo’s Kickstarter campaign video, Tate said, “The possibilities are endless as far as traveling to festivals and doing many different events throughout the city.” Indeed, in its first few months of existence, Citizen Hash has been spotted at a number of events around Indianapolis. The truck has been included in several “Clustertrucks,” for instance, and also has made appearances at the Statehouse Market and at Georgia Street’s “Food Truck Friday.” Furthermore, Citizen Hash has been featured on Indianapolis Monthly’s “Swoon List.”

“… We joined Indy Food Truck Alliance and it just took off,” said Dowell and Tate. “[We didn’t] think we were expecting to be as successful as we have been this season and are continuously humbled by the support we receive.” 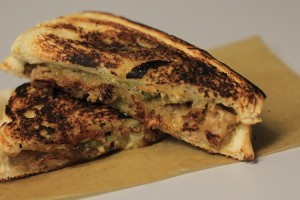 The Carnitas Grilled Cheese is one of Citizen Hash’s most popular dishes.

Every food truck has an angle and, for Citizen Hash, it’s an emphasis on Korean-Mexican fusion.

“To me, ‘hash’ means a hodge-podge of ingredients,” said Dowell. “It sort of gives us the freedom to be creative with the seasonal ingredients that we have and sort of do a little bit of everything.” This flexibility also allows for a rotating menu in which comfort food is served up with global flair. Citizen Hash’s hot dogs, for instance, are topped with avocado, cilantro and pineapple sauce. 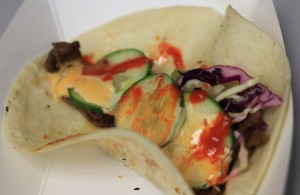 A single Korean BBQ Taco can be purchased for $4, or three for $10.

During my visit to the truck, I ordered a Carnitas Grilled Cheese and one Korean BBQ Taco. (The tacos can be ordered individually or as a set of three.) The grilled cheese sandwich was intensely satisfying. The bread was crisp, the melted cheese was inviting, and, even after I had finished licking my fingers, my taste buds asked for more. The taco’s fresh ingredients were perfect for a summertime lunch, and were complemented by a line of sriracha (Dowell and Tate keep a bottle of it at the window). I enjoyed the taco’s flavors, though the “insides” could have been more generous. That said, I’m eager to try more of Citizen Hash’s dishes—the “Indiana Rice Bowl” sounded tasty, but was sold out at the time of my visit.

“Had some Mexican street corn, fluffernutter cupcake, and veggie taco. One word sums it up. DEELISHHHH! CITIZEN HASH is the deal! Great food and great price. You NEED to check them out.” — Jamie B.

“OMG. The carnitas grilled cheese just made my week!” — @lamathews 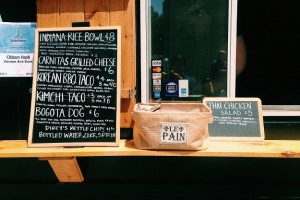