This marks another addition to the regular feature here at Little Indiana: Indiana Blogs! If you are an Indiana Blogger, please use the contact form and send me an email. You may be featured right here on Little Indiana. 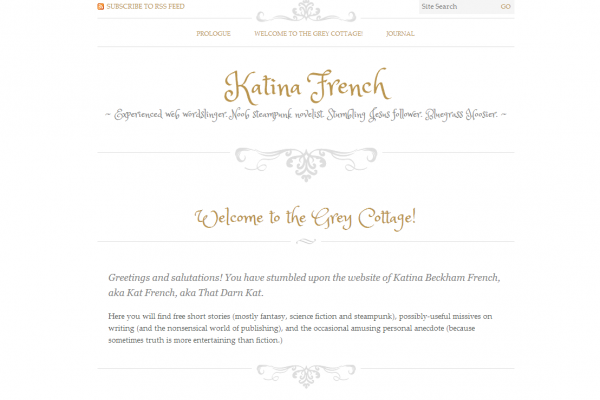 That Darn Kat is an Indiana blog that is a personal blog of writing and anecdotes, of fairy tales and steampunk.

Professional writer Katina French is no stranger to the written word: this Hoosier blogger has been writing since she was five years old!

Why did you start That Darn Kat?
I think I started blogging around winter 2003/2004. I lost an earlier iteration of my blog called “Life in Pal” that was all about living in Palmyra, a small town of

What about that name? Why That Darn Kat?
I actually loved the Hayley Mills movie That Darn Cat as a kid (I was obsessed with Siamese cats and watched a lot of Disney flicks). And I go by Kat, and I have a mischievous personality, so I thought it fit.

I sort of stalked the domain till it opened up and I grabbed it. For a while, the site was called Internet Bard, but I decided that sounded like I took myself a lot more seriously than I actually do. Or should.

What keeps you ready and raring to post? Why do you blog?
I blog for a lot of reasons. Partly because writing is how I process life. Partly because I love hearing what experiences and stories resonate with other people. And because I have a lot to say but as an introvert, saying it in person wears me out! My mouth lacks an edit button.

And also, I’ve gotten more serious (as serious as I get, anyway) about my fiction writing in the last two years. The blog is a good place to try out different stories, different styles, and get feedback in the comments. It’s evolving to be more of a place where I introduce folks to my writing.

You’ve been writing for a very long time…did I see that you started when you were 5–and stuck with it? How did you develop your love of the written word?
Yup! When I was five, I was determined to write not just an alphabet book, but the best darn alphabet book ever. I think I drove my mom nuts spelling unusual words like “alligator” and “carburetor.” When I was 18, I worked for the local radio station in Corydon, and my favorite part of the job was writing the commercials. I love finding the perfect word or phrase. I love the craft of it, the “smithing” part of “wordsmithing.” It’s almost like a game.

In my professional life, I’ve written about everything from military weapons simulators to lingerie to television shows to bourbon to plumbing–and all of it was fun in some way. I write for my employer’s blog, Social Media Explorer, which is a pretty popular blog in the social media marketing space. I’m a big kid, and I see words as my personal LEGO blocks. In February of this year, I got a fiction novella accepted for publication in an upcoming anthology, so I’m thrilled about that. I just keep setting new goals and finding new ways to keep it interesting.

As a writer…I’m assuming that you are also a reader! What are your top five books of all time–the ones that you can read over and over again?
Oh, wow. Probably my favorite fiction book is C.S. Lewis’ Till We Have Faces. It’s one of those books with so many layers, and every time I read it I find something new to appreciate.

Joshua Ferris’ And Then We Came to The End is basically Office Space set in an advertising agency. It’s funny and poignant and reminds me of everything I loved and hated about working in that environment. How very unglamorous and not-Mad-Men-like it really is.

Little Women, because I really relate to Jo, and it’s just a a set of characters I love spending time with. Plus, it’s so refreshingly matter-of-fact, in the way that it treats the characters’ spiritual lives and concerns as just an ordinary part of their daily lives. Jane Austen is the same way. Nowadays, if a character has a faith of some kind, it’s used as an excuse to smack you over the head with the writer’s particular agenda or philosophy about religion and faith.

Harry Potter and the Deathly Hallows, because I’m still, years later, in awe of how Rowling managed to land that plane. When you’ve built up a story like that over seven books, a whole mythology really, finishing in a way that was so fundamentally satisfying to the reader is just a crazy accomplishment. I enjoy it as both a reader and a student of storytelling.

What inspires you? Where do you find your story?
I’m a magnet for weird situations the same way a Jessica Fletcher was a magnet for murder victims. For example, the punk rock baby story, or another time a guy with a Saturn auto-wrapped with the band KISS tried to pick me up at a Shoney’s in Tennessee. My friends always just sort of shake their heads and say “Only you, Kat. This could only happen to you.”

I’m drawn to telling stories that are just sort of intrinsically interesting, or at least are interesting or funny from my skewed perspective. There’s a lot of humor in the stuff that I write, but I also look for soul. Not soul in a necessarily theological sense, but soul in the “something mysterious, real, and deep.” Even the fantasy and science fiction stuff I write, I try to ground in something soulful.

Is there anything else that you would like little Indiana readers to know?
They’re welcome to drop by That Darn Kat anytime! I love comments and meeting other small town Hoosiers. Also, I’m always looking for story ideas. Especially fractured fairy tales! If you have an idea for an oddball new take on a classic fairy tale, but don’t want to write it yourself, send it my way. 🙂

Also, if you’re ever in my neck of the woods, Harrison County, don’t forget to stop by Butt Drugs in Corydon and Grateful Goat Winery in Palmyra. Awesome local flavor, whether your poison of choice is ice cream sodas or Traminette.