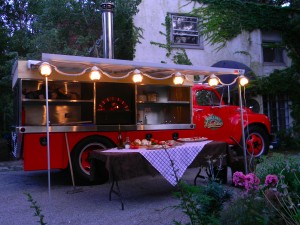 I catch Rolling Stonebaker each Saturday through the end of October at Chesterton’s European Market. I like to bring family and friends with me so I can eat my pizza and slices of theirs.

I also stop by their Beverly Shores location, grab some pizza and take it to the Indiana Dunes/Lake Michigan beach a mile away. They’re also at downtown Valparaiso’s farm market on Tuesdays.

Their signature pizza is the Purple Pig. Topped with smoked pork, barbecue sauce and a tangy red cabbage slaw, the out-of-this world creation was named the best pizza in Indiana and one of the top ones in the nation by Food Network magazine.

Their other favorites include the Potato Head (a white pizza with potatoes and red onions) and the Veggie Marinara (chock full of veggies they grow, so, “It tastes like you’re biting into a garden”). They even offer vegan and gluten-free pizzas.

My advice: try one of the pizzas they serve each week and get one of the specials that come and go. They had a pizza with vegetables and apricots awhile back that was so awesome I asked them to bring it back again.

The food that accompanies the pizzas is every bit as good, like the heirloom tomato salad with homemade basil dressing, mozzarella cheese and toasted pine nuts.  The vegetable garden outside the pizza truck owners’ home, which is located just down the road from where they set up their truck, provides many of the pizza toppings. 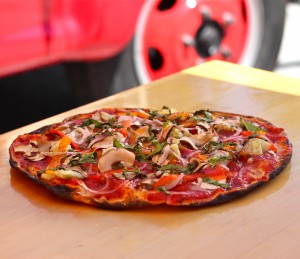 The Rolling Stonebaker came along at just the right time, because food trucks and fresh, local ingredients were both enjoying skyrocketing popularity, Georgion said.

Georgion believes the recipe for The Rolling Stonebaker’s success is that she and her husband ensure a great experience by being involved every step of the way, from growing the ingredients, to keeping the fire blazing in the oven to making the pizzas.

They also smoke their own meat for the meat-topped pizzas. You can almost smell your way to this one.

Their trucks are available in Porter County cities and towns like Chesterton, Valparaiso and Beverly Shores, and for catering jobs. See their website for the most updated list of locations.

Don’t just live in the city–explore it! THIS is Big City, Little Indiana.