Jasper County has been hit hard by floods. They are record-breaking, or so I have heard. In Rensselaer, Indiana it is ongoing.

As I write this, it is pouring down rain. Again. Rain has been the story of the last few weeks. 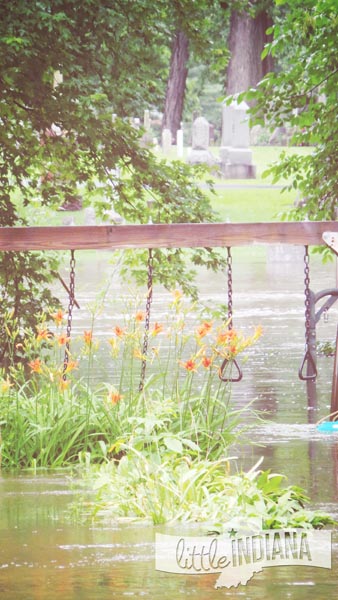 The Floodwater View from Washington Street of the Iroquois River and Weston Cemetery in Rensselaer, Indiana

Grabbing my camera, I headed for my favorite haunts in Rensselaer: Weston Cemetery, Busy Bee, Iroquois Park, Ayda’s Mexican Restaurant, Potowatami Park. Although I braved a few puddles here and there, I kept my head and didn’t attempt to go anywhere near the worst areas (that’s why cameras have a zoom feature, folks).

Though I was alone at most of these sites, there were quite a few people snapping cellphone pics of Potawatomi Park–and who can blame them? It does not resemble the spacious green space of concrete walking paths and benches that it was just a few weeks ago. But I am getting ahead of myself…

Some places in the world rain all the time. Floods are seasonal–and expected. But in Rensselaer? Well, we pretty much know that parts of Weston Cemetery might close for a few days when there’s been too much rain every now and again. We know that some country roads will be impassable. But we couldn’t have known that the new Potawatomi Park in downtown Rensselaer would be covered in water.

Just a few very short weeks ago, our five year old learned how to ride his bike without training wheels there. Now it is nothing but water. Everything: the benches, the trash cans, the picnic tables, are all buried under swirling, dirty water. Iroquois Park is impossible to get near. Bright, cheery playground equipment sits in way too much water. But it is far more than the parks that have suffered! 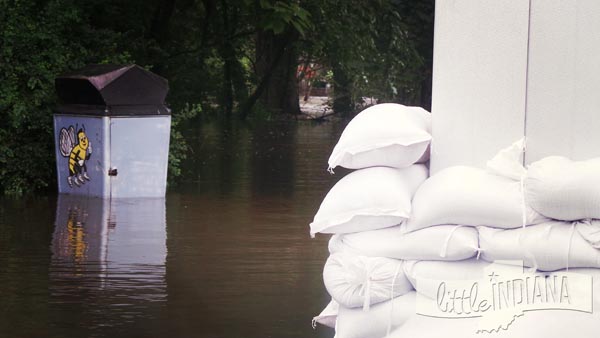 Busy Bee Ice Cream is sandbagged and ready–but with a close locale right next to the river, water has already overtaken a portion of the parking lot and is eking its way to the  back door. One of the trash cans is sitting in a swirl of water. No one will be eating ice cream in their favorite places for awhile.

The road near Potawatomi Park, just across the street from Busy Bee, is threatening to spill over onto one of the main drags through town. The water just keeps coming.

Ayda’s Mexican Restaurant, the only reason for most folks to visit that side of town because it is delicious and run by a nice family, now has water at its front door. They will be moving to a fantastic, roomy location in downtown Rensselaer, but renovations to that building didn’t complete quick enough. Both sides of the street are closed so, too, must the restaurant. It sits between two parts of the Iroquois River, and the back portion faces out over Potawatomi Park, or, at least, where Potawatomi Park should be located.

Homes along the Iroquois River 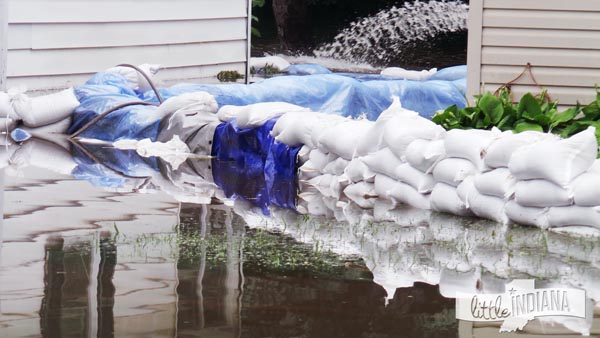 Homes Trying to Stay Dry During Flooding in Rensselaer, Indiana

But it is the homes that line that riverfront that are truly heartbreaking. Although, at the time of this writing, some are still far enough away from the water, there are far too many with outbuildings or portions of their house that now meet the river. While snapping images, I heard one couple talking about a house in the town, saying that one of the walls had collapsed. That illustrates, like nothing else, the sort of devastating currently happening.

Sandbags are strategically placed around homes, while sump pumps are working hard on basements. Everywhere you look there are hoses spanning out from houses. With water still surging towards them, it is a constant battle. My neighbor shared that many have pumps have given out, overworked beyond belief, yet with so much more to do.

I watched a football floating along the “new” river behind the homes on Washington Street, a toy that, I am sure, was left behind in a yard on a sunny, dry day. Swing sets sit in the water or right next to it. Vehicles are holding their own in a puddle of river that is sure to increase as the day continues.

It is still raining, even now. 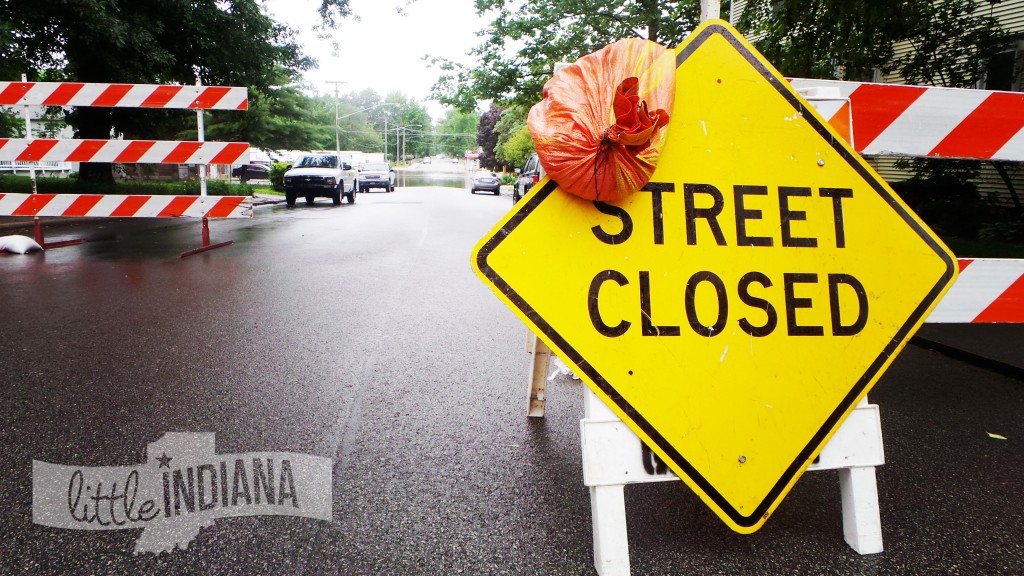 Streets are Closed All Over Rensseslaer, Indiana Due to Flooding

An incredible amount of streets are closed–or are fast becoming on their way to closure! Just walking our first family dog (that we have had for two whole days now), we kept having to stop and find a new way to go because the roads and sidewalks were so flooded!

Here’s a few facts I gleaned from the US National Weather Service of Boise Idaho Facebook Page that are particularly timely. Pay attention: this could save your life:

Just six inches of fast-moving water can knock over and carry off an adult. Twelve inches of water can float a small car. If that water is moving, it can carry that car away. Eighteen to twenty-four inches of flowing water can carry away most vehicles, including large SUVs. 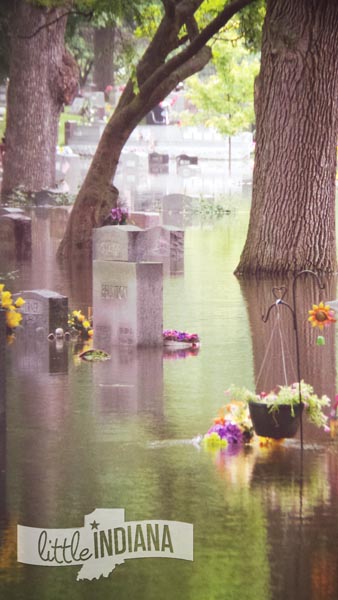 Here’s another fact for you: Jasper County is out of “High Water” signs. A couple of signs were found to be missing from another road but were fortunately caught before anyone tried to cross. But with a lack of signs, everyone should use extreme caution. The Sheriff’s office has already called with a recorded message for those living near encroaching water–and where to go to evacuate.

Temporary shelter is available at the First Presbyterian Church (220 N Cullen Street) and the Jasper County Animal Control office will assist with taking care of family pets because no pets are allowed at the shelter.

I hope that area vets will also step in if they have boarding space and the need becomes great. Anyone with blankets, toys, and pet food should consider making a donation to help support the shelter. Folks hit by the flood have enough to worry about!

This is a particularly dangerous time for out-of-towners, unfamiliar with what roads are low-lying. But it’s also a hazard for the rest of us.

The amount of water out there is so unbelievable that there are folks driving through flooded roadways way too fast. Yes, I am talking to you Mr. Gray Truck that splashed past the boys and I during a walk.

If someone hydroplanes, they will end up in a water-filled ditch, a ditch that probably can’t even be distinguished from the rest of the area. I saw people wading through the flooded (closed) road next to Weston Cemetery last night.

If you remember those facts above, how an adult can get knocked-over and carried away by only six inches of fast-moving water. SIX INCHES! Of course, that’s not forgetting that this river is polluted. 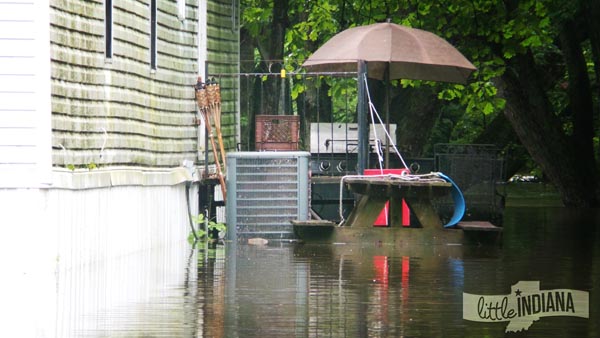 The best way to help would be to volunteer your time to fill sandbags when the next opportunity is announced. I cannot seem to find a specific place where there are announcements so, please, do us a favor and add them in below.

Please add the date, time, and place of sandbagging to the comment section below so folks can easily lend a hand. Together, we will see what we can save.

Images from the Flood in Northwest Indiana 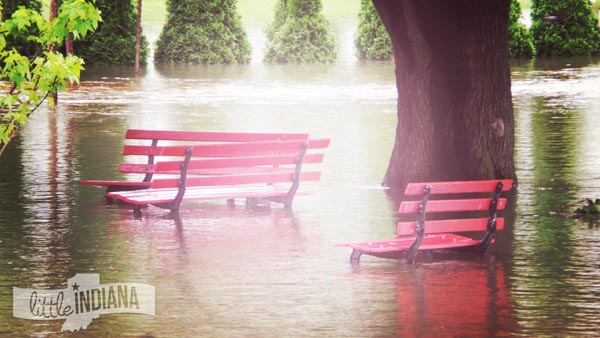 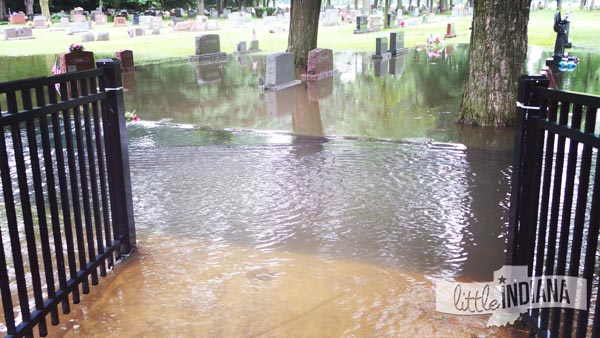 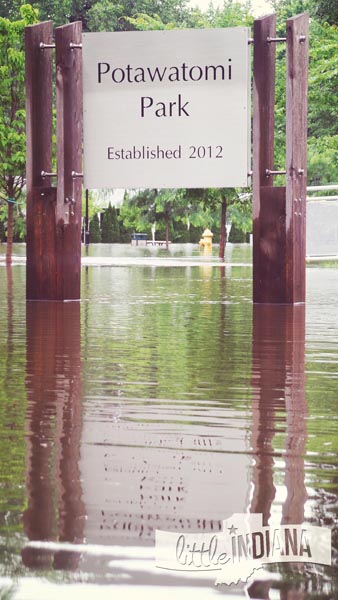 Potawatomi Park in Rensselaer is Underwater 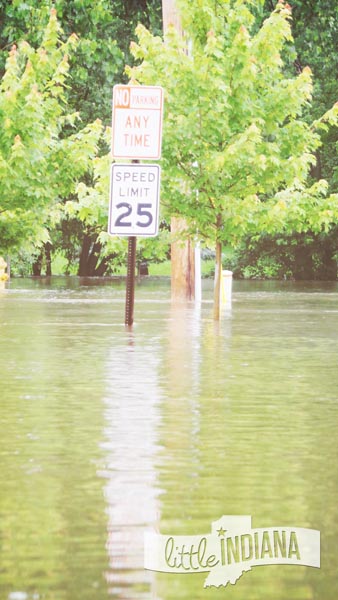 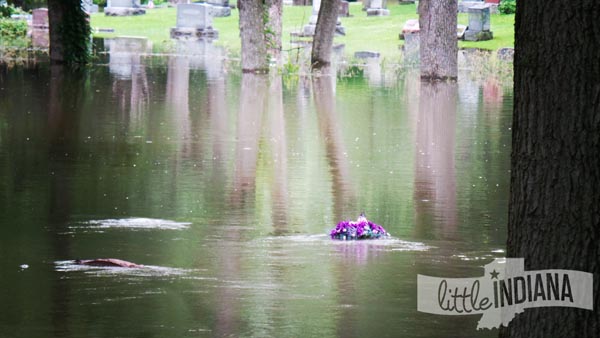