What do you do when it’s a week before you open and a blizzard hits, effectively shutting down the town? You turn to the manager and say, “Let’s stay open and make this our opening.” At least, that’s the way it went down at Mt. Hood Pizza and Grill in Rensselaer, Indiana, and they have been open ever since. Don’t worry–they kept their official grand opening date on February 29, 2016 for the fun of it. Locals could see spotlights illuminating the night sky, heralding the arrival of something fabulous.

This pizzeria got its start in Oregon. After a successful nine year run (if I remember right), the former Rensselaer resident and owner Craig Davisson, packed it up, moved back “home,” and waited. He liked the idea of opening up his pizza parlor again so, when the building became available, he bought the whole thing. The menu matches 90% of the previous Portland menu, according to Davisson. 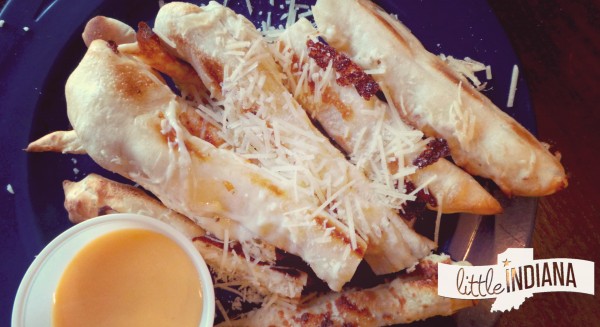 Mt Hood Pizza and Grill in Rensselaer, Indiana has Homemade Breadsticks (get them with cheese)

This building has seen some transformation. There’s a nice red color on one side of the walls, a gold on the other, and the ceiling has been repainted. It’s well-lit and provides a bit of seating inside–and out. As the folks at Mt. Hood Pizza like to say, they are “the only riverfront dining in Rensselaer.”

Long-time locals remember when it was a pool hall back in the 1970s (or so). It has sat empty, it has seen use as a pizza parlor, and now it is a whole new pizza parlor with a fresh, fun look, and friendly owners.

There’s more renovating on the docket. Manager Joel Haskell and owner Craig Davisson shared their plans. Since Davisson owns the whole building, they will open up a larger dining space in-between the two buildings that will be capable of seating another thirty to forty people. I had a chance to step back into the area and–wow! 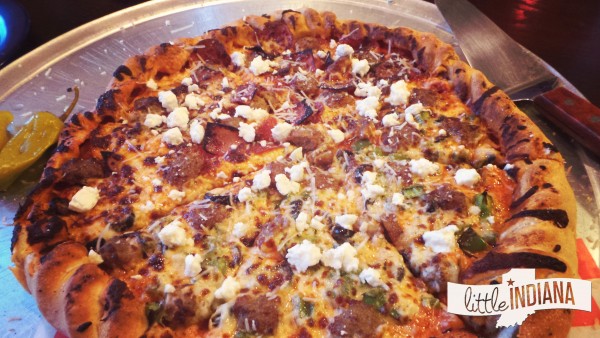 I had no idea this was such a large building. They will also use the space to add in more restrooms. They will have a few TVs around, and will be purchasing an NFL package so–we all know where you will be spending your Sundays. In a small town, news travels fast.

They’ve removed counters, and have plans to remove even more, to help open up the space, and improve the flow. Coolers at the end of the counter will soon hold ready-to-eat salads. There will also be something in the cooler that will really help families with a time crunch: take and bake pizzas. It was a late night stroke of brilliance. Although not currently listed on the menu, you may rest assured that the take and bake pizzas are available now.

Walk up to the window and place your order. You can see your salads assembled right in front of you. It’s easy to see the pizzas moving along too. Turn around and you will see the fountain drink area. We filled up our cups with water, the boys grabbed a colorful straw, and we plunked it down at a table that overlooked Iroquois Park.

It’s About the Food, Man 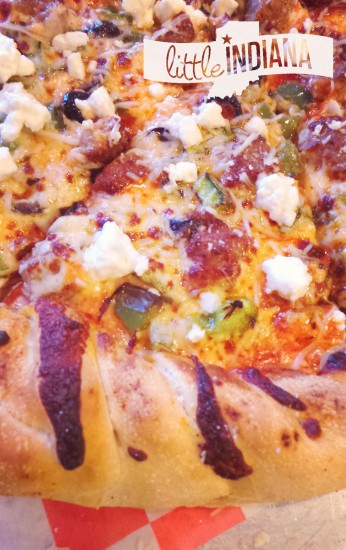 Mt. Hood Pizza and Grill is another fine example of a business supporting local. Everything is homemade. The crust actually comes from the local bakery, Clauss Bakery and Cafe. They had actually just picked up a fresh batch when we arrived. Perfect timing, wouldn’t you say?

I had high hopes for this one. They call their pizza crust a “twisted crust” because this isn’t any ordinary pizza crust. That’s just not how they roll at Mt. Hood Pizza and Grill. No, the end crust is stuffed with cheese and sauce. The crust has always been my favorite–now I’ve got two more reasons to love it.

The pizzas are one size: 15″. You can order by the pizza or by the slice. You’ll see the available pizzas at the counter too.

It was only our two boys and I that night. After a ridiculous amount of deliberation, we decided on a half and half pizza. My half contained feta, sausage, green pepper, and black olives while the boys ordered Canadian bacon, feta, pepperoni, and sausage–but then the youngest kept eating my side of the pizza.

Fingers and Chili. What was originally the name of the owner’s friend’s band has now gone down in food legend. Craig said that every single night at his Oregon place, one customer would call at 4:20 PM, and order up the Fingers and Chili. What is it? Jalapeno peppers, pepperoni, and sausage loaded on a pizza.

Breadsticks and wings are “really good.” The wings come in a few varieties: Buffalo, BBQ, and Wilbur’s Wing-it sauce. He’s a fan of the calzones, pointing out that they offer “the only calzones in town.” They are 1/3 of the pizza folded over. They are made fresh every day which he says “makes all the difference.” Haskell also shared that the Philly sandwiches have been the “hot ticket lately.” They are served on perfectly toasted bread. 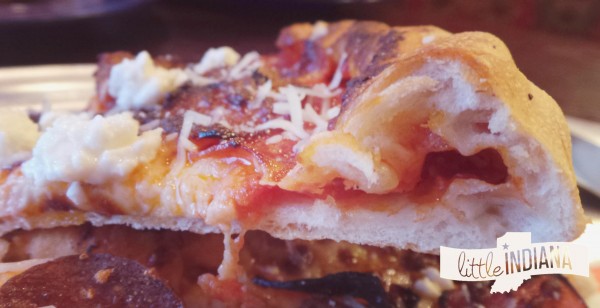 Mt Hood Pizza in Rensselaer, Indiana has a Twisted Crust that uses both cheese and sauce in the crust!

What’s more, this is one of the few good restaurants in town (and, as I have learned, most any small Hoosier town) that is actually open on Mondays. Take advantage of their reasonable prices, the nice selection, the fabulous breadsticks–and the take and bake pizza. Yes, they even deliver. Every night can be pizza night.