Oasis Diner is a wonderfully restored original diner in Plainfield, Indiana. Just like days gone by, you can still expect heaping portions and hot coffee.


In the 1940s and 1950s, roadside diners were all the rage. It brings back the time when people headed on the open road for vacation, when people were interested in new things to see and do, and hadn’t yet settled into their sofas to binge-watch the latest Netflix find.

It’s when the next adventure was just outside.

That hasn’t changed. Adventure still waits, but in this new era of convenience and chains, far fewer venture forth.

Oasis Diner in Plainfield, Indiana could help change your mind.

Atlantic City Stuffed French Toast is a breakfast item for big appetites. That is thick-sliced brioche toast that has been stuffed with cinnamon cream cheese and strawberries, then drizzled with strawberry sauce and sprinkled with powdered sugar.

Diners go back much further than you think. In the 1870s (yes, the 1870s), one man hitched up his horse to a wagon, serving food and coffee to late shift workers. Others soon copied the idea after noting its success.

As time passed, the look of a diner changed. It was no longer horse-pulled carts or streetcars, but buildings. Gleaming, bright buildings with neon-lit signs ushered in a new era of diners in the 1930s. Plainfield Diner opened its doors back in 1954.

Made in Signac, New Jersey by the Mountain View Diners, it had to be transported by train to our Hoosier state.

Plainfield Diner sat on the town’s Main Street, just as it should, for decades.

You would have seen it on the Historic National Road (you may also know it as US 40) at Ronald Reagan Parkway. Its long-time address was 9750 West Washington Street.

It was a part of nerve-wracking first dates and new friendships, family outings, and extended road trips.

Danger for the Oasis Diner in 2009 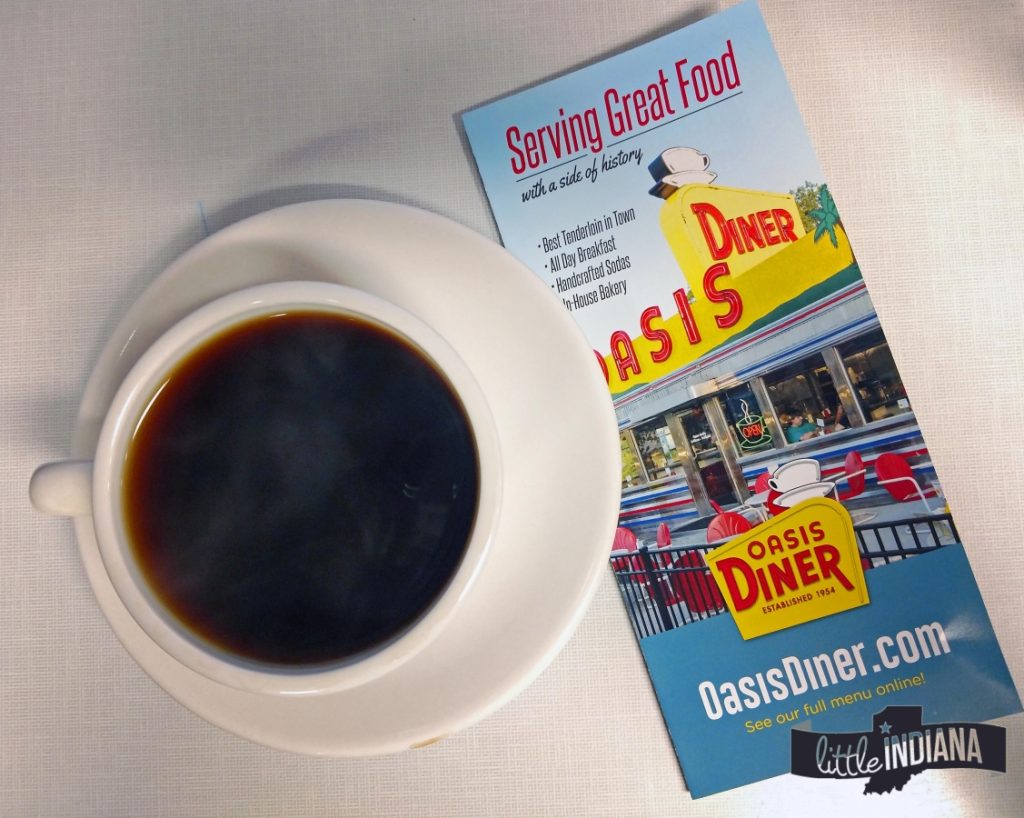 Oasis Diner is spiffed up, in a new location, and has been serving meals since 2014. 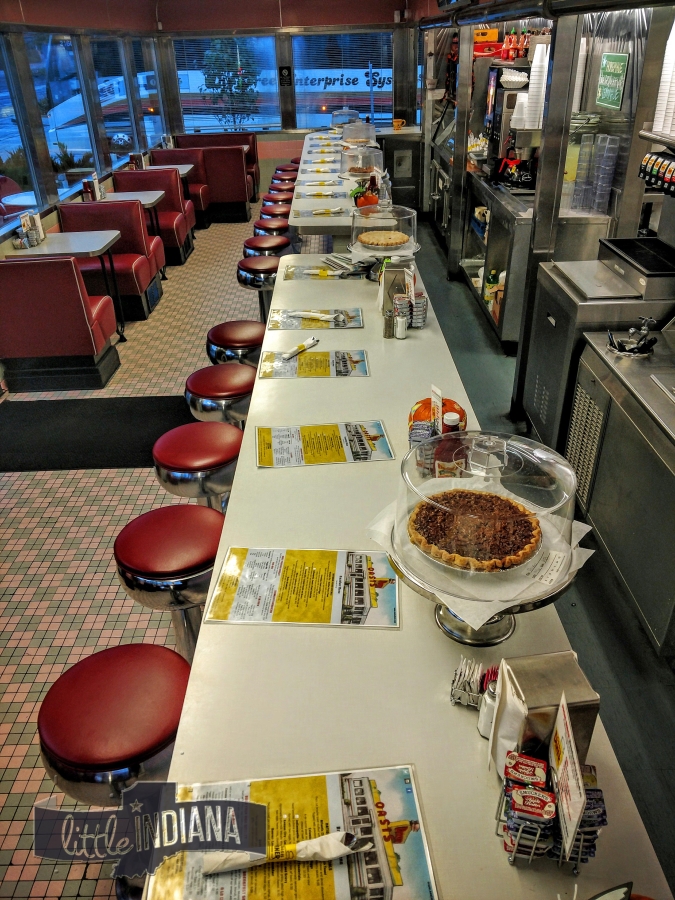 This isn’t the only seating. There is another area of seating on the other side. There are also vintage lunch boxes and license plates decorating the wall.

The Plainfield Health Department closed the restaurant in 2009 because of its deteriorating structure. It was no longer a safe place. The owners could choose to fix it or close.

Plainfield Diner, once the site of tv commercials and movie filmings, one of only five diners originally found on the historic road, closed permanently.

There it sat for a few years. The price of the land was worth more than the diner itself. If someone were going to buy it, changes were pretty good they would rip down the diner to make room for something else.

Fortunately, enough members of the community recognized what it had: a sense of history and nostalgia you just can’t replace.

Indiana Landmarks got involved. It listed the Plainfield Diner as one of its Top Ten Endangered Sites and spread the word about the state of the diner and its importance to the community.

Side note: Indiana Landmarks does the same thing today, just so you know. If you’ve ever wanted to get involved in historic preservation or want to own a piece of history, start there. They still maintain a list of the Top Ten Endangered Sites in Indiana.

But anyway, back to Plainfield Diner. 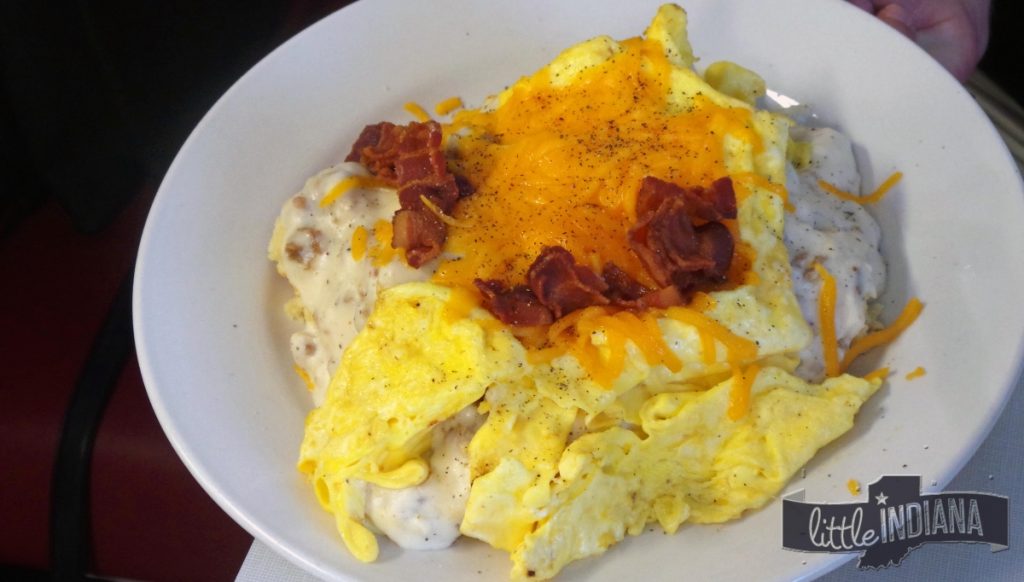 Biscuits and Gravy is always a popular menu choice. At Oasis Diner in Plainfield, they top it with two eggs, home fries, bacon, and cheese.

A study was conducted to see how the Oasis Diner could perform with a change of location. Doug Huff and his father-in-law, Don Rector decided to pursue ownership of the Oasis Diner. In November 2014, the Oasis Diner was finally relocated and saved from a potential tear-down after over two years of planning and research.

Inside and out, the diner is restored to its ultra-cool original 1950s style. The original limestone is still there, the stainless steel portion is all original, and there’s a redone area past that but don’t worry. It still mimics the original look.

Remember, Oasis Diner is one of not even five historic diners still open on US 40 from Cumberland, Maryland to Vandalia, Illinois. Let that sink in a moment.

Pink and green in 1950s style, Oasis Diner has heaps of atmosphere. The on-site bakery prepares those countertop delights.

At Oasis Diner, you will find all of the above.

As you can see reflected in the images on this page, you will receive hefty meals that stick to your ribs.

I’ve been through the Oasis Diner in Plainfield, Indiana twice. I like a big breakfast and Oasis Diner provides just that.

If you are part of a group, be prepared to laugh. Some of the breakfast items are almost comically large. The kitchen will start bringing out platefuls of food, so much so that your table will seem tiny.

The kitchen is downstairs. That’s where the magic happens as homemade bread, cinnamon rolls, and other diner favorites are pumped out daily.

What kind of desserts?

You can call ahead and provide twenty-four hours notification by placing your special order for items that include (at the time of this writing):

Steak and Eggs. A classic breakfast served at a Plainfield icon. It’s a match!

There is always a pie of the day but if you want a particular flavor to bring home, do call ahead twenty-four hours in advance.

Soda fans will be happy to learn about the handcrafted, locally-made sodas available at Oasis Diner. There isn’t any high fructose corn syrup in these creative concoctions–and the butterscotch root beer has a devoted following.

Speaking of devoted followings, the hand-breaded pork tenderloin is also a hit with locals (and beyond). While I have yet to eat anything other than breakfast at the Plainfield Diner, you know it is on my list. What’s on yours?

Sink back into the cushy booth, grab a seat at the counter, or take a place outside, and take in that great atmosphere.

If you have memories of this or other Hoosier diners, I’d love to hear it. Please, share your stories and preserve those memories in the comments section below.

For your convenience, I have a copy of the Oasis Diner in Plainfield menu. It is subject to change. If you have your heart set on something or are on a tight budget, always call ahead to verify the information contained within as prices, hours, and menu offerings may change.