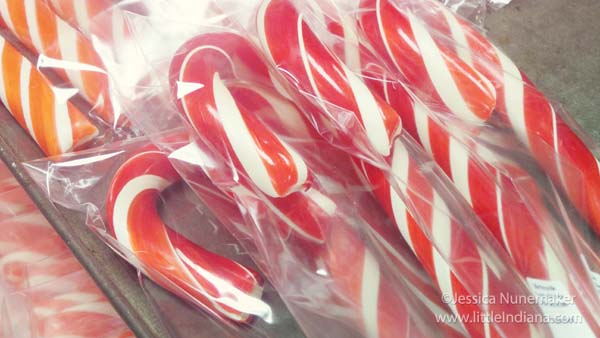 In 1919, Greek immigrant Jimmy Zapapas opened Martinsville Candy Kitchen. Now, people from all around flock to the small town shop to watch candy canes being made (and maybe even see a glimpse of Santa in the process). 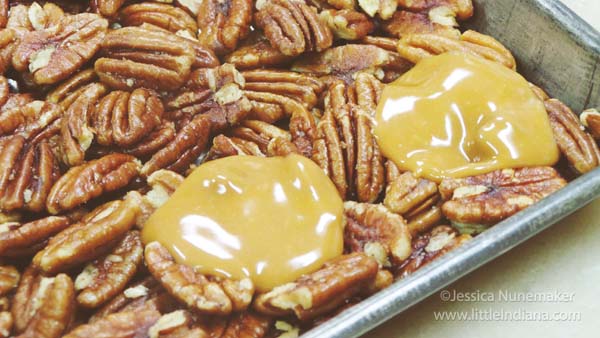 They never know exactly how many candy canes they will make in a year because phone calls and orders keep coming in until the very end. After purchasing the business in 2004, the new owners waited a few years before relocating the business a few doors down in the old Bertelsen’s Jewelry Store building.

Using the original stove from 1919, Martinsville Candy Kitchen begins the candy cane making process–a two person job. After the mostly sugar mixture reaches a temperature of 290* it is spread out on the original 1919 marble-topped table. The coolness of the table helps make the liquid candy canes solidify. Before it hardens, flavoring is adding and worked into the mix.

Divided the 15 pound mixture into parts, one section at a time gets the color mixed in by using the original hook. The candy cane mixture is no longer a liquid and become smooth and elastic so it is pulled and tugged to work in the red dye. Working it into the proper shape requires time spent near an open flame, to keep it pliable.

It’s an hour and a half long process. It’s also one that requires night after night of work to keep up with the orders. The Martinsville Candy Kitchen produces a multitude of flavors from traditional red and white striped peppermint or cherry or strawberry candy canes to wintergreen shamrocks to red, white, and blue patriotic canes. There’s even horehound, a long ago favorite flavor. 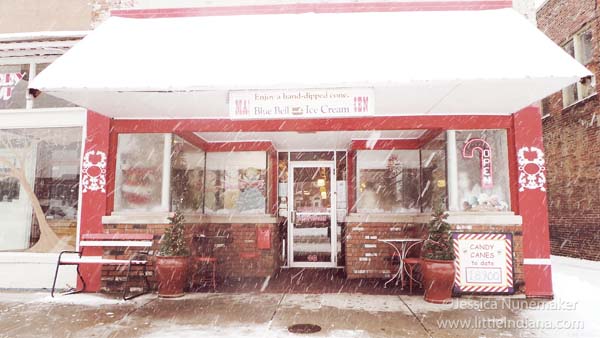 Homemade candy canes are absolutely incredible! They have a flavor completely unlike anything you can find in the store. It’s fantastic! They come in different shapes and sizes so you can pick and choose the kind that’s the best fit for you and yours.

They do handle a variety of other goods, too. In warmer months, pop inside and cool off with an ice cream cone, grabbing a seat at the counter in their adorable diner-style seating. It’s very cute. Kids will find it fun and exciting, I am sure.

The glass cases hold chocolate confections for those times when a candy cane just won’t cut it. All the typical candy treats are available including non-homemade items like candy buttons, saltwater taffy, and gummi everything.

Do you see the lengths to which I will go to get the outside shot of a business for you? It was cold and snowing so hard! But look at that. Now you know what it looks like on the outside so you can feel more comfortable finding your way! Right? Riiiight? Well, sort of. It appears that they did a bit of renovating last summer so my image may not quite match up. Just so you know.