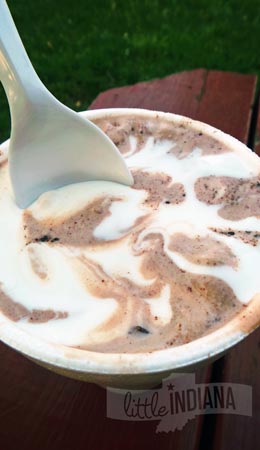 Yup’s Dairyland in Middlebury, Indiana brings out the crowd! I couldn’t believe how many folks had turned out for a snack. It wasn’t even officially summer yet but there was quite the crowd!

Since 1959, this small town ice cream shop has kept locals cooled off with sweet summer treats at its corner location at corner of S.R. 13 and S.R. 120.

I have to say that in all of my Indiana travels, I have yet to see any business with the name of Yup before! Where does a name like “Yup’s” come from?

The original owner, Marie Beachy (who unfortunately passed away in October of last year), named the business “Yup” after her husband, Joas “Yup” Beachy. He passed away back in 1981. They have been said to be wonderful people and will be greatly missed.

Switching hands, Yup’s Dairyland has had a few different owners in the decades that have passed since the Beachy’s passed along ownership but one thing is for certain: there’s nice choices here! 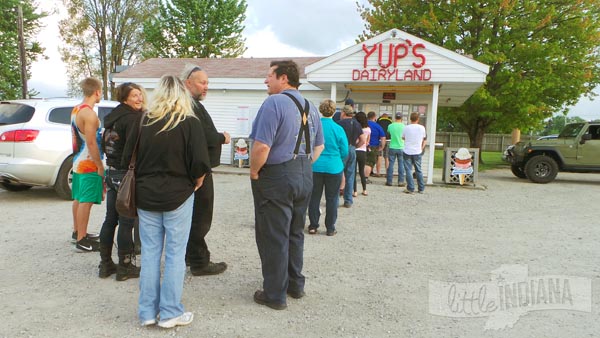 This is one of those get out of your car and stand in line kind of places. My favorite! For people that already live in the area, it’s obviously a time for socializing, and for everyone else, like me, it’s a chance to take the time to really think about what kind of ice cream I want. Hey, knowing I’ve probably only got one shot at getting it right, I’ve got to make sure it counts!

Their handmade novelties, as they call them, include Rockets, ice cream dipped in chocolate; ice cream sandwiches, and something called Beachy Bars. Well, you know the name for that one comes from the original owner! I think that’s really a cute touch. It’s a layered treat with fudge, chopped peanuts, and ice cream dipped in (you guessed it) chocolate! Now that certainly sounded good… 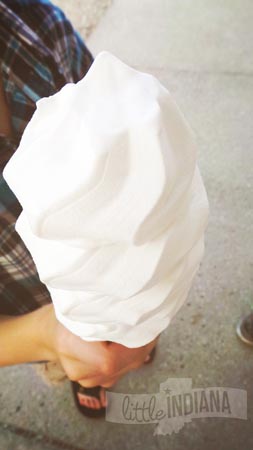 But first things first. Kid #2 needed help figuring out what to have (it will be much easier when he can read the menu). Kid #1 decided to try the Pina Colada Sundae because everyone else was getting it and because it was a special item that they don’t carry all the time. He’s always a fan of things that aren’t consistently available.

Kid #2 finally decided on the sweet coconut frozen yogurt on a cone. We are huge fans of Thai coconut ice cream in this house so he was hoping it would be something similar. He loved it!

They dish out Hudsonville hard-pack ice cream. I finally honed in on the Tiger Traxx ice cream as a marshmallow sundae. Yes, that was really good. Be forewarned: the small was really small. After our large meal, it ended up being just enough but I wasn’t expecting it to be quite so little. Kid #1 was a bit alarmed at first but agreed that it was “just the right size.”

Folks love the topsy turvy (like an upside-down banana split in a cup), the slushies, and the black raspberry shakes. Dog lovers will like seeing the pup cup on the menu, a 2 or 4 ounce cup of vanilla ice cream and a doggy bone. Cute!

They do serve food though I only saw customers walking away with ice cream in their hands. It’s the typical ice cream parlor kind of food like hot dogs and hamburgers. 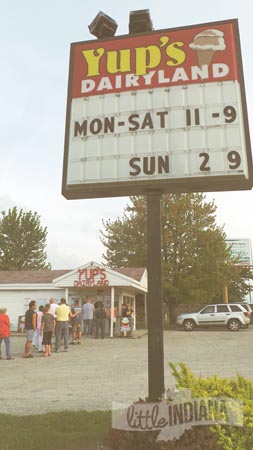 What to know before you go: Yup’s Dairyland accepts only cash or checks (I’m assuming the checks option is for locals only) but you remember the small town rule about always carrying cash so you will be fine, right? Right. They don’t have a website or even a Facebook Page so be sure to call the phone number below before heading out just to make sure that they are open. But you also knew to do that already too, didn’t you? Great!

Don’t expect to get in and out quickly. As a long-time local favorite, there’s typically a line although you can avoid the huge line by not going after church lets out on Sundays. So, go with the small town flow and relax. Make pals with the people in line around you, and get ready to join the decades of Yup’s Dairyland devotees everywhere! See you in Middlebury.