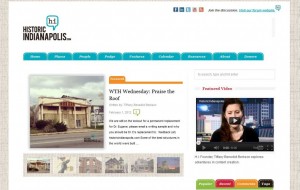 Historic Indianapolis is an Indiana blog that turns the focus on the city–highlighting and saving its hidden (and not so hidden) treasures.

From architecture to vintage finds, Historic Indianapolis will give you the inside scoop on big city buildings and beyond!

Enlightening and insightful, Historic Indianapolis serves as an important reminder to preserve the architectural gems in your very own neighborhood. If not you, then who?

Why did you start Historic Indianapolis?
I started HI as a way to share all of the awesome (and mostly forgotten) bits and pieces of the city’s past. I had been an editor on my neighborhood newsletter and then became the neighborhood historian, but I learned about much more than just my neighborhood and wanted to share my finds.

I started an Historic Indianapolis Blogspot account in July 2009, but went to a full 7-days a week website in February 2010, and continue to do so.

What about that name? Why Historic Indianapolis?
I couldn’t think of a better or more succinct name to represent history or historic stuff + Indianapolis

What keeps you ready and raring to post? Why do you blog?
At first, it was just wanting to share the spoils of my hunt; now with almost well over 15,000 views each month (and growing) I also feel an obligation to keep the audience coming back for more.

I love that every day has something different and that I still have so many more ideas to roll out! I also am very motivated by making a difference—I want to incite as much passion for history and heritage amongst others as I feel. It’s a tall order I know, but if I don’t get there, I’ll die trying!

Have you always been interested in history? What was the first building that made you feel like you HAD to know more?
I hated history in high school, but my mom started reading Greek mythology to me at a young age, so no and yes. The turning point for me was as a teenager, getting to stay at the Hotel del Coronado on Coronado Island (San Diego) in California—that’s my native state. It was love at first sight/ site.

In Indianapolis, I’m far more obsessed with the ones we’ve lost. Because we have lost the vast majority of the best of the city’s architecture.

Do you have a favorite site? Some building or location that blew you away with its history?
West Baden Springs Hotel—there aren’t even words. Just go. I don’t care if you have traveled the globe, you can still appreciate the jaw-dropping, utterly inspiring restoration job there. I will forever love Indiana Landmarks and the Cook family for this gift to Indiana and Hoosiers!

You are cruising around in search of the next hidden Hoosier treasure–what song is blasting away on the radio?
I have almost 20,000 songs in my iPod, which is usually what I’m listening to, so that’s almost unanswerable. Recently, I’ve been on a Julian Velard kick (and with any luck, I’ll get him to come play Indianapolis again in March—he’s usually headlining places in NY, London and Netherlands, but he played The Irving in summer 2011). Aside from that it’s from Aaliyah to Frank Zappa. Though my all-time faves are Jellyfish, Annie Lennox and Eric Clapton.

Is there anything else that you would like little Indiana readers to know?
Get to know your family tree—it will really enrich the way you see the world.

Learn the stories of the world around you.

New doesn’t innately have value and the epidemic of disposability that seems so pervasive in our country needs to do an about-face!

Once a building is gone, it’s gone forever. When it goes, that’s your heritage that is getting decimated. Exhaust all options before destruction. Some of the smaller towns in Indianapolis have done a far better job than Indianapolis as far as preserving their heritage. Of course, others have done just as bad, but I love stumbling into small Indiana towns that still have their old courthouse and shops around the square!

Where History is No Mystery

Tiffany has a knack and a passion for unearthing the details in Circle City. Connect to the past and present with Historic Indianapolis. Thanks to Tiffany for popping over to little Indiana today!