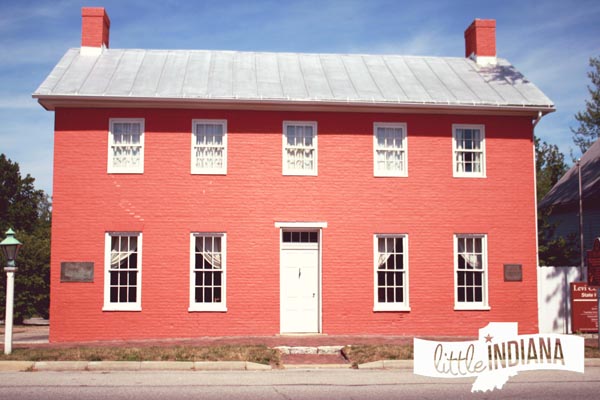 From the outside, you probably wouldn’t realize that the Levi and Catharine Coffin State Historic Site in Fountain City, Indiana is an important National Historic Landmark.

And yet, this Wayne County attraction is a simple, eight room, 1839 built brick home. Unlike other homes that share the same style, the Coffins were Quakers, so it lacks the ornamentation other homes in that era possessed. So, what is so special about this home?

It has long been hailed the “Grand Central Station of the Underground Railroad.” 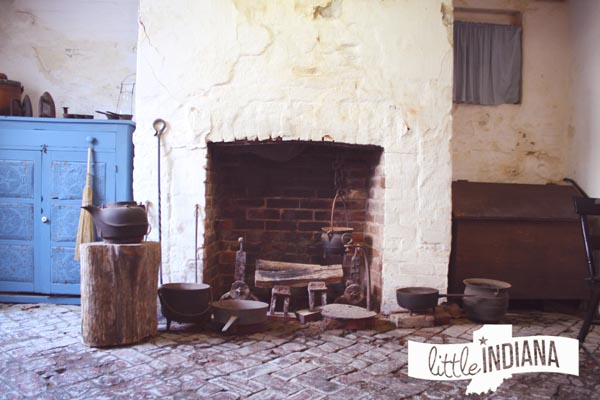 Unlike the way we usually layout homes, the Levi and Catharine Coffin State Historic Site in Fountain City, Indiana boasted a lower level kitchen. This way, when freedom

New to town, the Coffins set up shop, selling general merchandise. As they adjusted to life in their new town, they quickly discovered that freedom seekers continually passed through the area, trying to hide with the freed slaves already in the town or had arrangements made by them for passage to Canada. Either way, it didn’t often go very well.

These were dangerous times for the freedom seekers–and for the people who got involved in aiding them.

Coffin “did not feel bound to respect human laws that came in direct contact with the law of God.” Levi Coffin and his wife were in agreement that something had to be done.

And so, they did. They built a new home meant for hiding these fugitives of the Federal law. 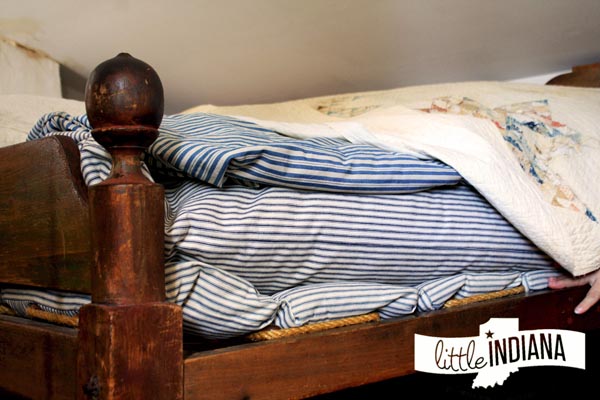 If hunters came searching for freedom seekers, there were places to hide. This mattress served as a not so great hiding spot for two giggling girls. They had to be separated or they risk being discovered!

Although he was encouraged to ditch his abolitionist efforts, both by other Quakers who feared for the safety of the couple, as well as by slave hunters, he dug in. For the Coffins, they saw their business drop in their store as pro-slavery folks shopped elsewhere. But, business picked up. New settlers were moving in all around them. A good thing, because harboring the freedom seekers wasn’t cheap.

For many of the families in the area, it was the reason they had moved here in the first place. They wanted to help with the anti-slavery efforts but they hadn’t known how. Newly married Levi and Catharine Coffin changed all of that.

Located in the center of town right on Highway 27, his newly built home was perfectly positioned. Surrounded by other Quakers, if there was trouble, the other families acted as lookouts, and alerted the Coffins. Bounty hunters? The other families could easily pass that news along too.

The Coffin family ensured that those fleeing to freedom were away from prying eyes–and it began with the construction of the Levi and Catharine Coffin house. The upper-level bedroom contains a secret room. The ceiling is unusually low in order to hide the room. Its entrance can be hidden by the simple placement of a bed. That’s not all:

There’s a large attic perfect for hiding larger families or groups of people. There’s more. No one had to risk getting caught for a drink of water. The basement has its own well. Most rooms had two ways to escape.

The winter of 1826-1827 saw these runaways on the path to the Levi and Catharine Coffin House. As word spread, the number of fugitives grew. So much so, that he had to keep “a team and a wagon ready at hand.” There was a good reason for it. In his autobiography, he wrote:

“Three principal lines from the South converged at my house: one from Cincinati, one from Madison, and one from Jeffersonville, Indiana. The roads were always in running order, the connections were good, the conductiors active and zealous, and there was no lack of passengers. Seldom a week passed without our receiving passengers by the mysterious road….”

From this point, there were three more routes used to get these runaways to Canada:

Visit Richmond shares that there was “One to Greenville, OH, to Sandusky, across Lake Erie to Ontario, Canada; one to Fort Wayne, to Adrian, Michigan and then to Canada; and one to Cabin Creek in southwestern Randolph County to Grant County and to Battle Creek, MI and then to Ontario, Canada, across the Detroit River. This made it possible to shift fugitives from one route to another which thoroughly confused the slave hunters.” 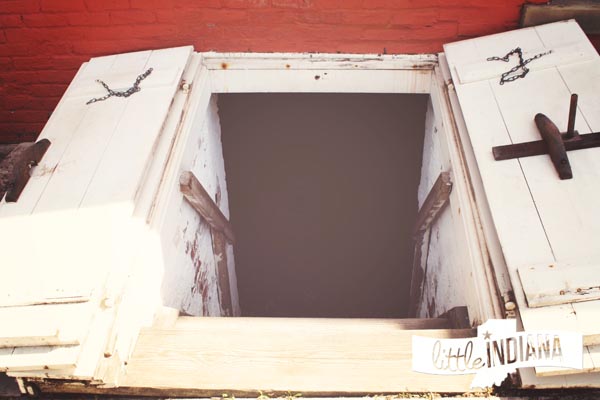 At the Levi and Catharine Coffin House, most rooms had multiple ways of escape.

The people arrived alone or in groups, sometimes with a Caucasian guide, but most often not. They may have traveled 25 or 30 miles that night and in all kinds of conditions. They often lacked shoes.

Levi Coffin writes of one mother and her two children in his book:

“Hearing that her children were to be sold away from her, she determined to take them with her and attempt to reach Canada. She had heard that Canada was a place where all were free, and that by traveling toward the north star she could reach it. She managed to get over the Ohio River with her two little girls, and then commenced her long and toilsome journey northward. Fearing to travel on the road, even at night, lest she should meet somebody, she made her way through the woods and across fields, living on fruits and green corn, when she could procure them, and sometimes suffering severely for lack of food.

Thus she wandered on, and at last reached our neighborhood. Seeing a cabin where some colored people lived she made her way to it. The people received her kindly, and at once conducted her to our house. She was so exhausted by the hardships of her long journey, and so weakened by hunger, having denied herself to feed her children, that she soon became quite sick.

Her children were very tired, but soon recovered their strength, and were in good health. They had no shoes nor clothing except what they had on, and that was in tatters. Dr. Henry H. Way was called in, and faithfully attended the sick woman, until her health was restored. Then the little party were provided with good clothing and other comforts, and were sent on their way to Canada.”

Levi Coffin and his wife did not only give these people a safe place to hide, they provided them with a doctor, clothing, and food. Catharine set up a sewing circle inside of her home because so many of the fugitives were dressed in rags and barefoot.

Some of the freedom seekers passed through quickly. Others, especially when they were ill or starving, were housed until they could be healed, clothed, and rested, and then sent upon their way.

For the twenty years that they lived in Newport, they helped at least 2,000 former slaves make their way north. The exact number is not known, of course, because keeping an official record would have been too dangerous. In many cases, they did not even know the names of the people they helped or where they were from.

Understandably, many of the people they helped were tight-lipped about their experiences…unless they were recovering for a few days, in which case many did feel comfortable enough to share their story.

The Coffins remained here until 1847, when they moved to Cincinnati, Ohio, and opened up a new store, one that only sold items made from free labor. After the Emancipation Proclamation, Coffin continued his work in a new way:

Visit Richmond again shares, “Abolitionists were willing to pay high prices for these things which were known as “Free Labor Goods.”

According to the National Park Service, Coffin visited England in 1864, “and was instrumental in the formation of an Englishman’s Freedmen’s Aid Society which contributed money, clothing, and other articles to newly freed African Americans.” He kept up the fight until the day he died. 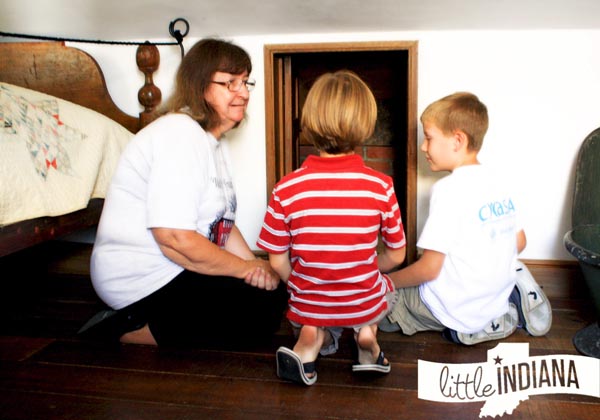 Deemed a National Historic Landmark back in 1965, the Levi Coffin House is in excellent condition. A visit to the Wayne County attraction will help it all sink in. You can take a tour, listen to more stories, and see actual pieces of furniture that actually belonged to the Coffins. Isn’t that incredible?

Kid #1 absolutely loved this Wayne County historical attraction. He was able to correctly answer the tour guide’s questions–and sure made us proud. Even today, weeks later, he still brings up the Levi Coffin House.

I think it’s in part that the tour guide was so incredibly knowledgeable. Although the items inside are interesting, she didn’t just walk us through.

She stopped, explained the story behind the room, shared stories from Levi Coffin’s book by memory, and then carried on. It was all so very fascinating.

The best part is that they have plans for expansion. With the recent purchase of the building next door, they are hoping to install an interpretive center and expand the tale of Levi and Catharine Coffin in this small Indiana town. You can help with your monetary donations.

You can find the Levi and Catharine Coffin State Historic Site on Facebook. You’ll see neat photos, documents, and related info with every update of the page.

Special thank you to Visit Wayne County Tourism for hosting our stay. Opinions remain mine and mine alone (as always).