Graham’s Bee Works in Morgantown, Indiana: Indiana Beekeeping and Beyond!

Graham’s Bee Works in Morgantown, Indiana: Indiana Beekeeping and Beyond! 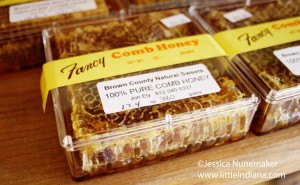 When I saw the sign for Graham’s Bee Works in Morgantown, Indiana, I had no idea what we were walking into.

I was surprised to find that this Morgan County shop is an educational hub and supplier’s shop for all things beekeeping.

Right in the front entryway you’ll find a few shelves. Local Brown County honey, honeycomb, and even products made from beeswax each have their place. It’s really neat to see!

When we saw a couple of large containers of pollen we had to know more. It turns out that Graham’s Bee Works is not just a place for folks to buy locally produced bee related products but also a place where Indiana beekeepers (and beyond) can get their start.

In fact, they recently had someone all the way from Colorado drive over for a whole heap of bees–and drove them back. That’s one car I’d want to steer clear off! 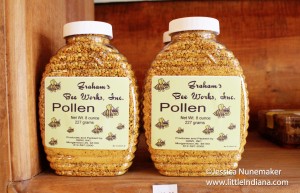 This was amazing! Okay, so I admit a bit of emotion quite akin to terror pops up when a bee flies within a 5 foot radius from me–but even so, I learned so much about bees!

Our  oldest son was completely enthralled. He thought it was going to be another shop where he can’t touch anything. As he said, “I thought it would be boring but that was really interesting.”

And now? Well, we think we’d like to venture into beekeeping ourselves. We don’t exactly have a lot of land, but we think this would be really neat and educational for the kids. Plus, with the amount of Indiana honey we go through, it’s not a bad idea at all! 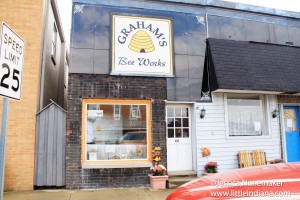 Graham’s Bee Works in Morgantown, Indiana is something we’ve never seen before. After visiting almost 100 towns–and with almost 800 articles on little Indiana, that says a lot!

So, although I’m not exactly cured of my bee phobia, I do have a finer appreciation for the busy little workers.