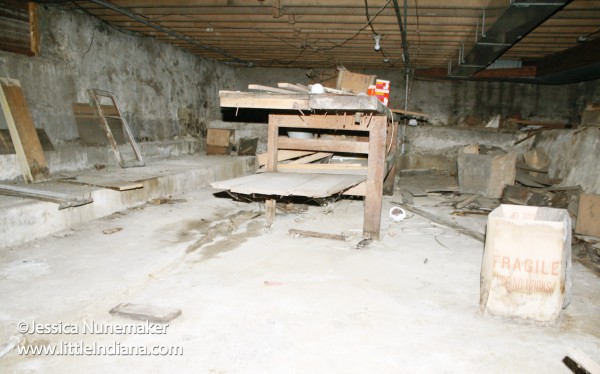 So many buildings in small Indiana towns across the state have a story–and in Wakarusa, Indiana, Yoder Brothers Mercantile has a most unusual history!

Now, I’ve seen some pretty unique things in my travels. But here in Wakarusa, Indiana it was the first time anyone said, “Hey! You want to see the embalming table in the basement?”

Here’s where that small Indiana town trust comes into play. I know this because we followed the owner down into one of the creepiest basements I have ever been in in my entire life–and that says a lot, too, because my basement is also the stuff that nightmares are made of. Once upon a time, there was once a mortuary in the basement of this building. It is a fitting setting to a mortuary, let me tell you what!

It is interesting to think that upstairs would have been the old department store. Judging from the windows and the flooring, it was probably a very nice one too. But who knew what lurked in the basement?

He said that the mortuary used the space for many years until they, um, clogged up the pipes. Ew. They had no choice but to move somewhere else. So, they moved–and have been there in a new location ever since. But they left behind a table and the showers. Yes, showers. The creepy metal stalls where the bodies would be washed off. That was located not too far from the stairs.

It was a long and narrow basement and rather dark. Long forgotten items lined the walls. Old boxes, crates, pieces of wood. Cans of old paint. It was hard telling.

The table was slightly illuminated by a bare bulb. Yes, a single bare bulb just like in every other terrifically terrifying horror movie! A shallow gouge in the concrete on the floor led to the drain that long ago couldn’t keep up…I mean, this was a shallow, shallow gouge. It is no wonder they had to move elsewhere. It is also really kind of gross to think about. So, I will leave you with that slightly grotesque image in your head.