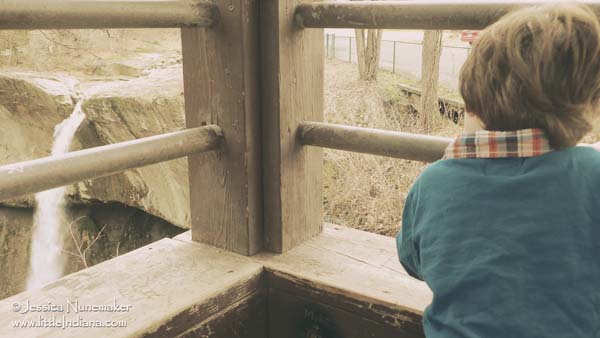 Indiana’s tallest free-flowing waterfall is in Williamsport, Indiana. Referred to as Williamsport Falls, if you didn’t know it was there in the downtown, I think it would be easy to miss–and you don’t want to miss Indiana’s tallest waterfall, do you? I didn’t think so. Please, say “hello” to one unique and unusual Indiana attraction. 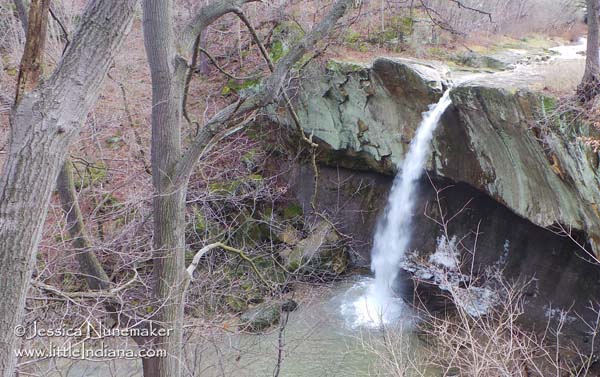 There is a bit of a disagreement as to whether Williamsport Falls are the tallest waterfall in the state or not. Some mention Fremont Falls and others mention Schoolhouse Falls…it’s an ongoing debate and, depending where you are from, you may have a stronger feeling toward one over another. As for me, I could enjoy it just as it is.

But at 90 feet, they are tall. It’s kind of a neat (and certainly unique) feature to see in Indiana, particularly given its proximity to a downtown area.

Once upon a time, though, before grassland and marshland were destroyed by overreaching farmers, the Falls consistently, well, fell. So much so that a mill was supported nearby. It would have been a wonderful thing to see. 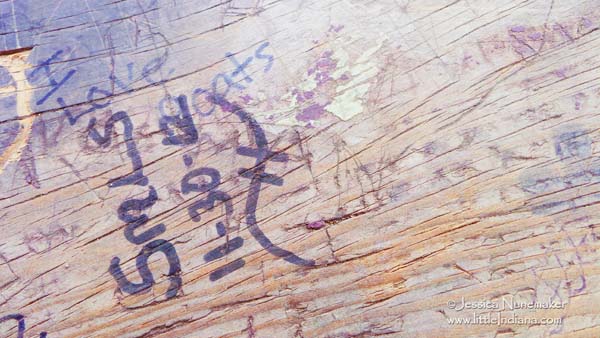 Today, though, you will want to shoot for the days after a rain or melting snow if you want to see this Indiana waterfall in action. That will guarantee a better shot at seeing the Falls really flowing.

Unfortunately, there are plenty of times when the Warren County waterfall is completely dry, giving it the less than glamorous nickname “Dry Falls.” Either way, it’s a really pretty area and certainly worth a look. Lots of trees, plenty of rocks, and if you are lucky–the waterfall will be flowing. Although it is discouraged, some people do climb their way (carefully) down to the bottom. It’s steep and rocky, just so you know.

My pick? There’s a small parking area as well as an overlook for better (safer) viewing. It’s a little graffiti-filled so, you know, there’s plenty to read while you are admiring the landscape. It’s also covered so even on a day with less than stellar weather, you can still admire this neat Indiana feature.

From Route 28, you’ll want to head South onto Monroe Street. Do you see the train tracks? Look to the left and you’ll notice a fire station–follow the road to get to the viewing area. I am so a landmark driver. Hopefully that helps you get to Williamsport Falls without any problems.

If you found this article helpful, please “like” it and share it with your friends. Have you been to Williamsport Falls? What do you think is the best time of year for a visit? Let me know in the comments below.