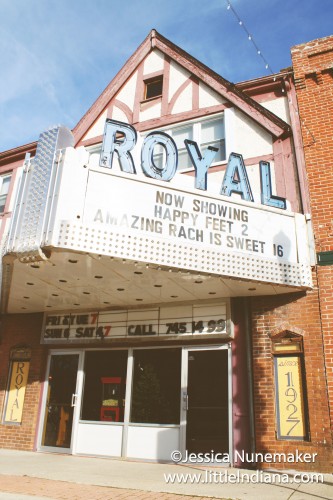 Are you an aspiring film director or producer or even a professional? Or, do you just really, really like to watch movies?

Either way, you will probably love to know about the Indiana Short Film Festival in Danville, Indiana–the only festival of its kind in Central Indiana!

What is a short film? A short film is 40 minutes or less and may choose among a variety of genres to enter in the Indiana Short Film Festival, formerly known as the Film Festival of Hendricks County.

So far, there’s more than Hoosier filmmakers submitting their short films! In fact, right now there are more than 25 entries representing filmmakers from California, Texas, Florida, Illinois and even international entries from as far away as Canada, Croatia, and Serbia!

A panel of judges will decide who will stay and who will go. There will be a grand jury winner. Movie goers will flock to the Royal Theater in Danville, Indiana October 10 and 11, 2014.

The audience will rate films and, combined with the scores from the judges, winners will be tallied up for each genre.

There’s more! Those directors and producers who make it to the final cut may not only attend the unique Indiana festival, but may also take part in a Q&A session with the audience after their film screening!

Later, a VIP meet-and-greet will let fans and producers/directors get the chance to personally interact and receive valuable feedback–as well as a chance for movie buffs to chit chat with new talent. It’s a great way to get into the minds of the people behind the short films and for them to gain insight into what really went over well with movie watchers.

This isn’t limited only to professionals. Students may get involved as well as submit their short film to genres that include animation, comedies, documentaries, and plenty more. It’s a great way to gain a bit of experience–and young filmmakers would do well to tack on “winner” to their portfolio.

Submit Your Short Film for Free

Last year may have been big, with 85 short films received, and 64 of them making it to the big screen–but this year could prove to be the biggest yet! Word has only spread about the well-organized and well-executed festival. Having a chance to interact with viewers is a definite plus for both fans and the producers/directors.

Interested? Of course you are! Complete the application and release form, make sure your format is in one of the required formats, and has a minimum resolution of 480p (720p or higher is ideal).

Once your masterpiece is complete, you may send in your short film to the Indiana Short Film Festival, 101 South Indiana Street, Danville, IN 46122 by July 1, 2014.