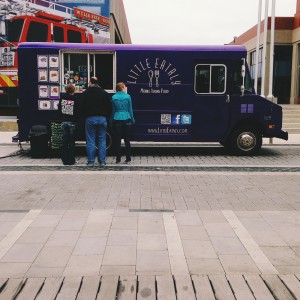 Though it’s recognized as the “little purple truck,” food truck Little Eataly is fighting a David and Goliath-type battle.

Little Eataly hit the streets of Indianapolis in December 2011, serving both cannoli and friendly conversation. Using word play, owners Chea and Rob Carmack titled their business after the Little Italy neighborhoods found around the country. However, in August 2013, the Carmacks received a letter from attorneys representing Eataly the Market, whose 60,000-square foot food markets in New York City and Chicago are co-owned by celebrity chef Mario Batali. The letter stated that the Carmacks were infringing on Eataly’s trademark, and that their Indy-based food truck constituted unfair competition in the marketplace. In a letter to their fans, the Carmacks said that, even after attempted compromises, “Eataly will not back down.” Though the Carmacks may have to rebrand, one aspect of their business has never changed—the quality of their food.

The most common sentiment held among Little Eataly’s thousands of Facebook and Twitter fans is that the Carmacks’ food “speaks for itself.” After attending a Food Truck Friday event on Georgia Street, I, too, became a fan. It was hard to keep from salivating over the photos of sandwiches and appetizers that hung on the side of the truck. In the end, I ordered a Pig & Fig Panini, a chickpea salad and, for dessert, cannoli. 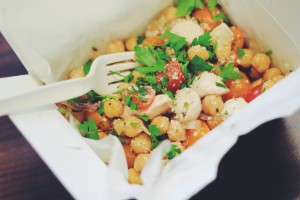 The food was absolutely delicious. The fresh, local ingredients Little Eataly uses were most prevalent in the tangy chickpea salad, as each bite burst with mozzarella or tomato or red onion. The panini, made with ciabatta, was appropriately chewy, and the fig butter that dressed it complemented the other ingredients. As for the cannoli? They were sweet and satisfying, a smooth blend of salt and cream. It was mouth-watering, all of it, and I had to remind myself — several times, in fact — that I needed to “save half for later.”

I wrapped up the leftovers, satisfied that — for $14 — I was able to receive a three-course meal. Also noteworthy are the to-go containers themselves — they’re fully recyclable. Though the wait to receive my food took a bit longer than the average food truck, I was able to pass the time by socializing with Rob and Chea. They were amicable, considerate and easy to joke with. More importantly, their conversation left me feeling optimistic. And their food? Well, that left me happily satisfied. The little purple truck may be the “little guy” in the battle against goliath Eataly the Market, but the Carmacks can take pride in their greatest weapon — their Sicilian-style food. 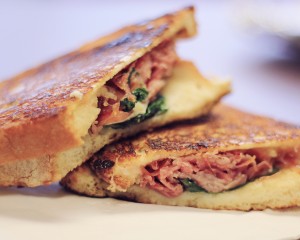 “I can taste the love for Indianapolis and their customers in every bite of their delicious food. Well done my friend!” — Greg S.

“Just had your penne w/vodka sauce and it was delicious! Also love that you don’t use Styrofoam for your to-go containers!” — Mary B.

“If you get the chance to try the Italian Beef from @LittleEataly, I highly recommend it. Had it for lunch today – delicious as usual!” — @cgrieze 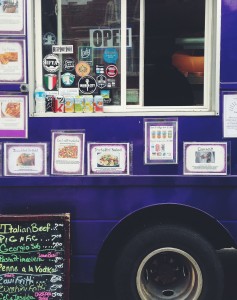