During the lunch hour, downtown Indianapolis is flush with sounds: the chatter of co-workers, the occasional sounding of a horn, and the clack of a woman’s heels upon the bricks in Monument Circle.

There are tourists snapping photos of the Statehouse, and there are cyclists pedaling to their next destination. There are cars. There are pedestrians. And, sometimes, there is a lime green food truck. 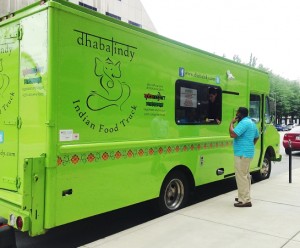 Dhaba Indy, an extension of the Indianapolis restaurant Spice Nation, hit the streets in June 2013.

The lime green truck first appeared on the streets in June 2013, and was started by Ganga-ram Digambar, who was a chef in Indianapolis, and who had previously worked as a demi-chef de partie for Carnival Cruise Lines. Digambar, who studied hotel management and catering technology in south India, started the food truck because he “wanted to relax.” The truck’s name, Dhaba Indy, blended his love for Indian roadside restaurants—called “dhaba”—and a love for Indianapolis.

Today, Dhaba Indy is a frequent visitor to downtown intersections, with Market and Illinois, Illinois and Ohio and Monument Circle being a few of its regular haunts. The truck also participates in several events around the city, including the Statehouse Market and First Friday’s “Food Truck Friday,” which is located at the Old National Centre. Dhaba Indy is also an extension of the vegetarian- and vegan-friendly restaurant Spice Nation, which is located on the west side of Indy and owned by Digambar. On Thursday nights, Spice Nation offers a vegan buffet, but the cuisine can also be found on the truck throughout the week. 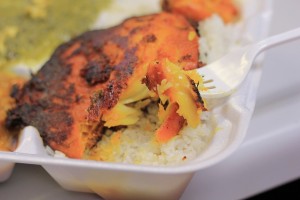 The grilled tilapia is one of Dhaba Indy’s most popular dishes. It is made twice a week, and an order for it can be reserved over Facebook, Twitter or by text.

Dhaba Indy serves up “Indian food with a Western touch.” Its daily special—for $7 to $8—offers you a choice of two entrees served with rice and naan. Choices include, but are not limited to, channa masala, palak paneer (a creamy spinach sauce with cheese), and tandoori chicken. The daily special is what I typically order when I visit Dhaba Indy, and I have never been disappointed. The meal is cost-effective, filling and, more importantly, delicious. When I take my meals back to the office, it’s not uncommon for my co-workers to gather around my desk, breathing in the aromas.

During my last visit to Dhaba Indy, I ordered the grilled tilapia, which cost $8 and filled an entire to-go container. The tilapia, which Digambar makes twice a week, is marinated in turmeric, coriander, chili powder, ginger and garlic. The tilapia sells out quickly, but when it’s on the menu, you can reserve your order for it over Facebook, Twitter or by text. And, of course, when you go to pick up your order, all you have to do is look for the lime green truck.

“If you haven’t tried Dhaba Indy, you need to; it’s my latest addiction! Dhaba Chicken Curry & Palak Paneer are my current favs.” — Tara A.

“The food is amazing and the samosas … words cannot express.” — Anwulika A.

“Have said it b4 but @DhabaIndy is one of the best Indy food trucks for value and quality.” — S8EPilot 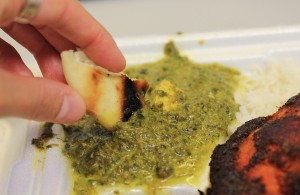