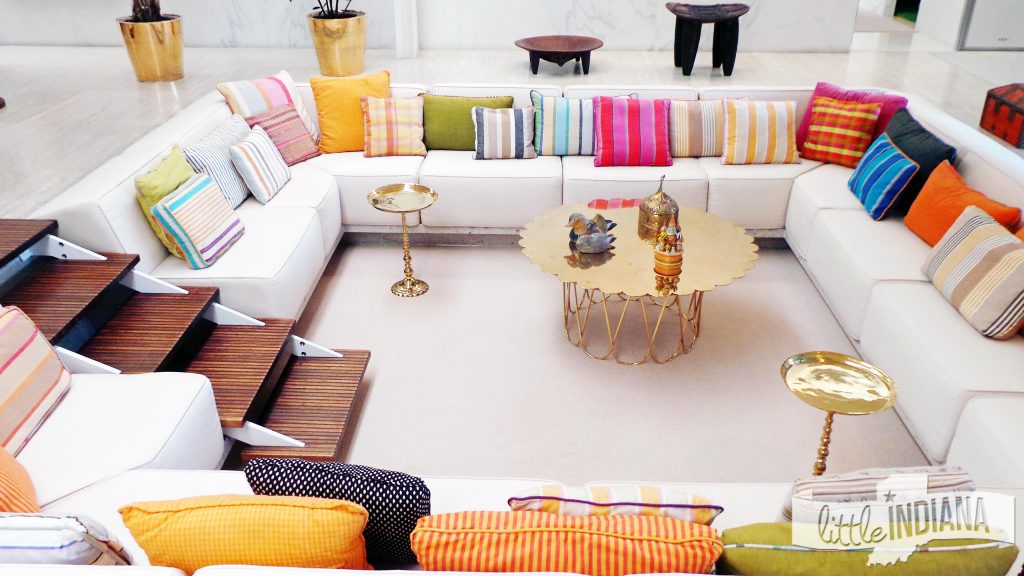 The Miller House in Columbus combined form with function in a way that Saarinen’s commercial spaces didn’t have to worry about. This time, the design was for a family of six (with another baby on the way). Girard textiles jazz up the white sofa.

Are you ready to up your Indiana travel game? You’ll want to add this Hoosier marvel to the list. The year was 1953. J. Irwin Miller and his wife Xenia Simons Miller decided to build a home. It would be the kind of home that would one day contribute toward making Columbus, Indiana an architectural destination. This wasn’t going to be just any home. It was going to use a unique design and it would pull notable architects and designers from the Miller’s own friend’s list.

This list included such names as Eero Saarinen, the architect; Alexander Girard, the interior designer; and Dan Kiley, the landscape artist.

Why the Miller House is Architecturally Important 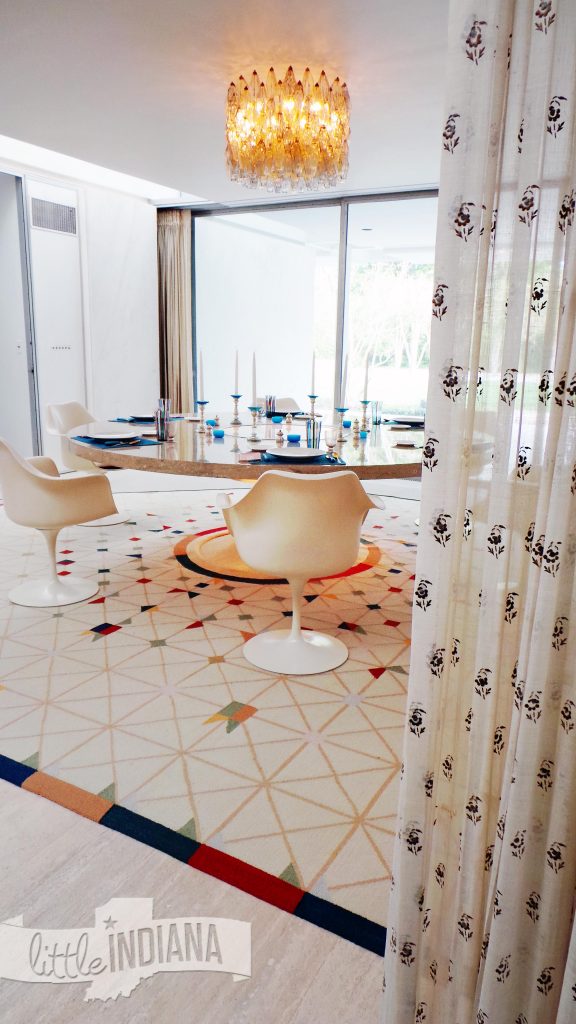 Eliel Saarinen had already designed a Columbus building the decade before when he designed the First Christian Church.

That church was the first contemporary building constructed in Columbus, but it wasn’t going to be the last. In fact, Eero Saarinen would later construct North Christian Church in the same unique contemporary style.

Miller asked his friend, Eliel, and his friend’s son, Eero Saarinen to get to work designing a home of their own. Residential spaces weren’t exactly on his favorites list and that’s partly why the home is an architectural destination today.

Unlike the commercial spaces that Saarinen is known and lauded for, the Miller House was made with multiple needs in mind. For starters, the Millers were big on entertaining, hosting business guests from around the world.

Second, and a factor that was certainly different from Saarinen’s commercial projects: the year-round home had to fit the needs of a family. After all, the Millers already had four children when Saarinen began his design–and Mrs. Miller was pregnant with their fifth (and final) child.

The Millers enjoyed entertaining and wanted a space that would combine form with function.

The Miller House in Columbus, Indiana 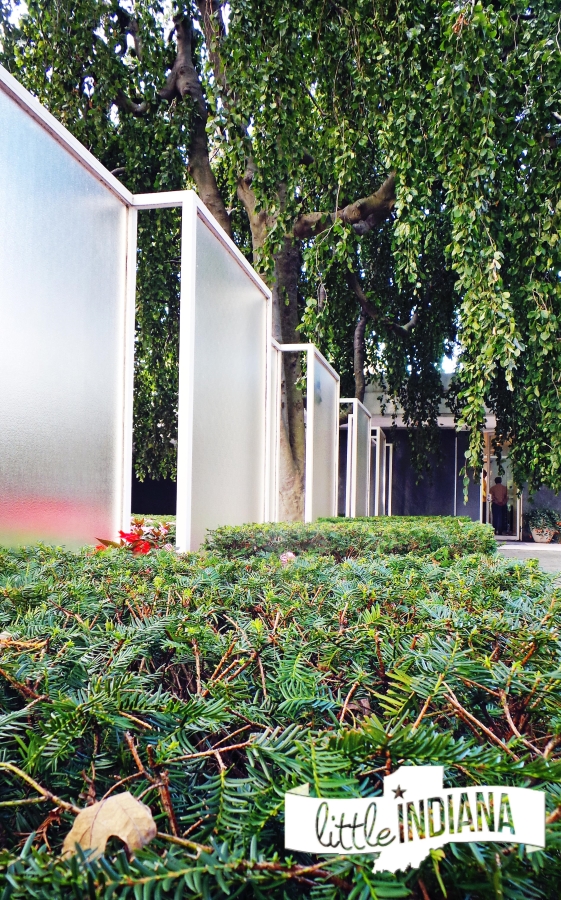 Situated on thirteen beautifully landscaped acres in Southern Indiana that feature an almost hidden swimming pool in secret garden style, geometric garden design, and a mixing of glass and stone in various outdoor elements, the rectangular site faces a street on one end and a river on the other.

The home is divided into spaces: the master bedroom suite, the children’s bedrooms and sitting rooms, the kitchen and laundry room, and another zone made of the servant’s quarters, guest room, and the carport.

What’s interesting is the idea behind the children’s rooms. The bedrooms are small, yet functional. They aren’t used for much more than sleeping. Instead, they feature a shared play space to encourage social activity and messy play.

An open layout, lots of stone and glass walls, and a grid of skylights are a few of the notable features of the Miller House. The home could easily have become cold and impersonal.

However, soft light from the skylights and large wall windows light the way everywhere.

Imagine, if you will, the kind of publicity that Saarinen received. His designs, whether praised or criticized, received attention. Yet here in this Midwestern town, the Millers lived out their lives mostly undisturbed by the media–for fifty years.

It wasn’t until May 2011 that the public could finally see inside the Miller House. Can you imagine the excitement? 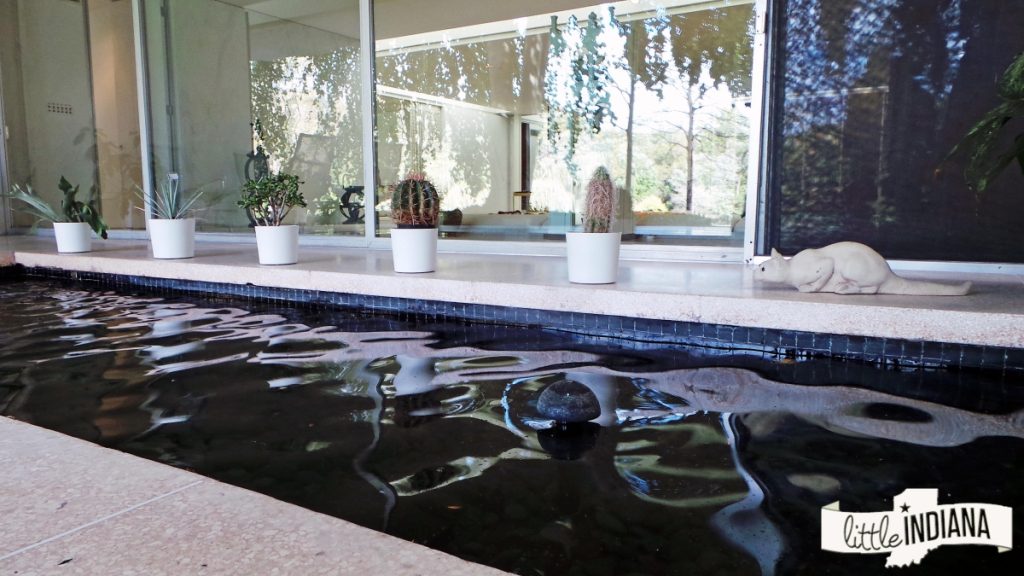 Everything inside the home belonged to the Miller family. The only exception is the terrace furniture, a fitting donation from Henry Eames.

Of course, there are no longer children’s toys lying about. Everyone grew up and the decor in the children’s rooms reflects a different stage of life. The piano, however, still bears the mark of a child who did not want to practice the piano that day and took his anger out on the instrument. His teeth marks remain.

The allée of honey locust trees on the west side of the house are incredible. Unfortunately, the bas-relief by Jacques Lipschitz that once occupied the south end and the reclining female figure by Henry Moore at the north end of the path were sold to settle the estate.

Gone, too, is the art collection, the sculptures, paintings, and drawings of the masters. It makes you wonder where these pieces once hung but those in the know believe the lack of art actually makes the architecture stand out even more. 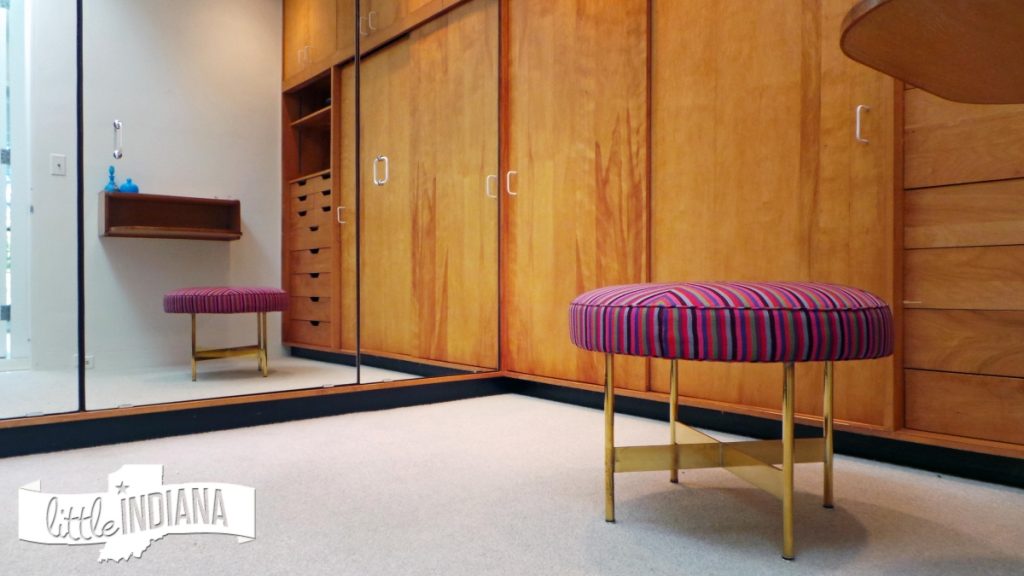 Even the closets have a simple beauty to them.

You see, the Millers, and Xenia Miller, in particular, were big fans of art. Xenia chaired the Indiana Arts Commission and the board of the Indiana Endowment for the Arts. She was a driving force behind the creation of the Indianapolis Museum of Art-Columbus Gallery. She did it all without a college degree and while raising all those children, I might add.

Over the years, they collected works from Kandinsky, Henry Moore, Monet, and Picasso. Right there in Columbus. Can you imagine? Seventeen pieces became a part of the Impressionist and Modern Art Evening Sale at Christie’s in London on June 24, 2008.

Together, the pieces were expected to gain more than $80 million. I’ll let that sink in for a moment.

Here’s what Christie’s had to say about the Millers at the time of the sale. Christopher Burge, Honorary Chairman, Christie’s Americas, wrote:

In life, Mr. and Mrs. Miller were humble, direct, unpretentious and somewhat shy. Yet their influence – on the art world, on the business community, on the citizens of Columbus – was expansive, far-reaching, complex and bold. Predominant in their lives was a profound commitment to their community, a family tradition and an almost spiritual philosophy about the importance of enriching the lives of their fellow citizens.

What did they do to deserve such praise? You can bet it involved more than building a home.

About the Miller Family 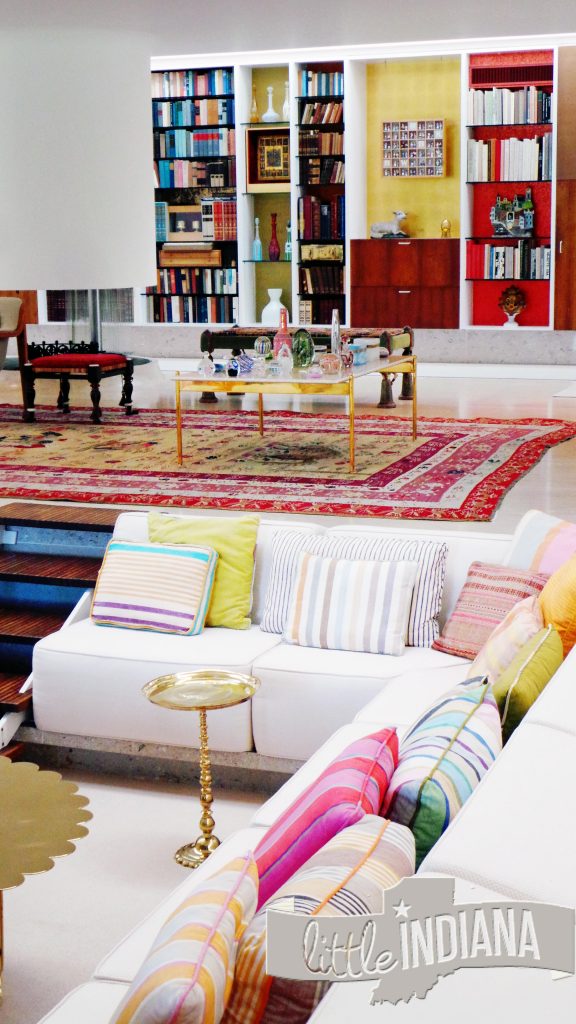 You can see the beginning of the 50′ storage wall here.

Irwin Miller created the Architecture Program in 1952 as a way to better serve his community through the philanthropic project he began, the Cummins Engine Foundation.

He understood the importance of buildings and place and the positive impact the right building can make on the people that work there. So, the foundation offered to pay for architects’ fees for any public building on one condition: if the local government would only choose an architect from a provided list.

As you might imagine, it made quite the impact on the city of Columbus. There aren’t any eyesore dragging down the city. Roughly half of the sixty unique architectural wonders in Columbus stemmed from this philanthropic effort.

The architects include well-known names such as Eliel and Eero Saarinen (as you already know), I. M. Pei, Kevin Roche, and Richard Meier.

Six other buildings in Columbus are also National Historic Landmarks. For a city boasting less than 50,000 people, that is no small accomplishment.

Are you beginning to understand the impact that the Miller’s had not only in Columbus but the world?

The American Institute of Architects ranked it 6th in the nation for architectural innovation and design – right behind Chicago, New York, Boston, San Francisco, and Washington, D.C. – which puts Columbus ahead of Portland, Seattle, Philadelphia, and Minneapolis. 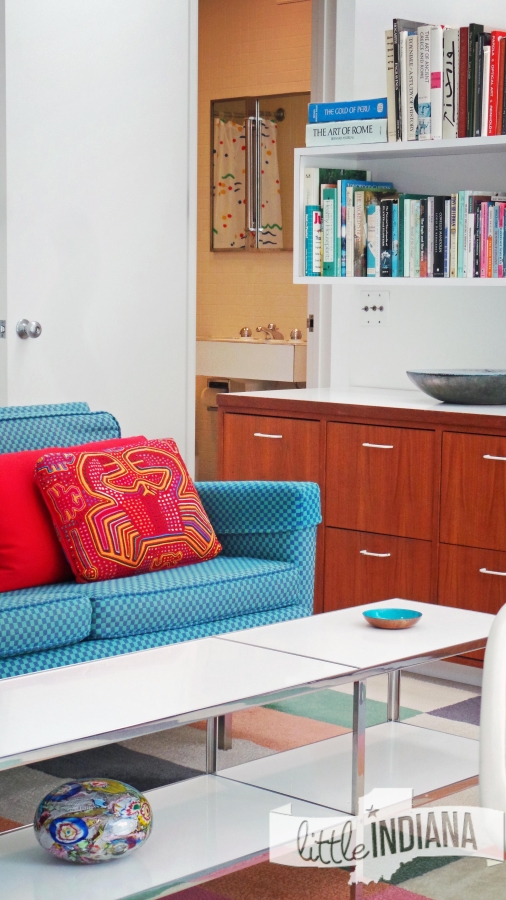 The children’s bedrooms were small but included a shared playroom.

Architects from around the world head to the Miller House in Columbus as well as to admire the rest of the city’s architecture.

They discuss, they study, and they learn what they can from the masters while closely examining the work they left behind.

This house has left a lasting impact in the world of architecture and it is right here in Columbus. In Indiana. What if every place were thoughtful in their architecture? Not exactly race car or corn related, now is it?

One of my favorite stories of the day concerned a group of architects who were visiting the Miller Home.

They were trying really hard to one-up each other, bringing up all of the architectural facts and concepts they could in order to make it clear who knew more about what.

While touring the exterior of the home, one of the visitors walked backward while discussing the architecture–and fell right into the small outdoor reflecting pool just off the dining room.

What happened next? Everyone pretended it didn’t happen. 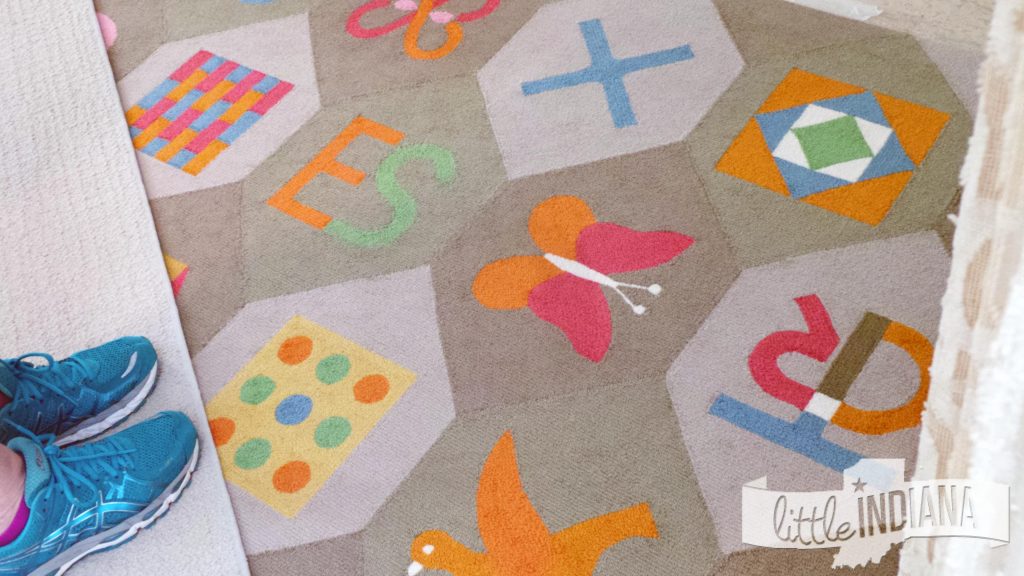 Stay on the path! Tour the Miller House in Columbus, Indiana but stay on the designated walkways and rugs.

To sign up for a tour is simple. Although the home and grounds are cared for by the Indianapolis Museum of Art, tours occur through the Columbus Area Visitors Center. It is only thanks to the Miller Family, Irwin-Sweeney-Miller Foundation, and Cummins Foundation that these tours are possible.

Your Indiana travel adventure will begin when you hop on a small tour bus and take off for the home. You’ll learn interesting facts and stories about the people who lived there and the impact they made on the community.

As you can see, you will have rugs you will need to stay on in order to help protect the $2 million renovations the home underweight before its public unveiling. A tour guide will make sure that you don’t deviate from the path and that you don’t touch anything.

If you’ve been looking for a unique Indiana attraction, this would be it.

Want a tour? Contact the Visit Columbus website to schedule a tour of the Miller House and Gardens.

Just don’t forget to tell them you saw it on Little Indiana.