In 1839, Nashville, Indiana wasn’t taking any chances when it came to prisoners and jail-time. When we say that they “just don’t make them like they used to,” I never would have thought that that expression would apply to jails. But this one was inescapable.

The present structure, the old Brown County jail, is an interesting (and quick) look back in the past. You can tour both inside and out of this two story building. 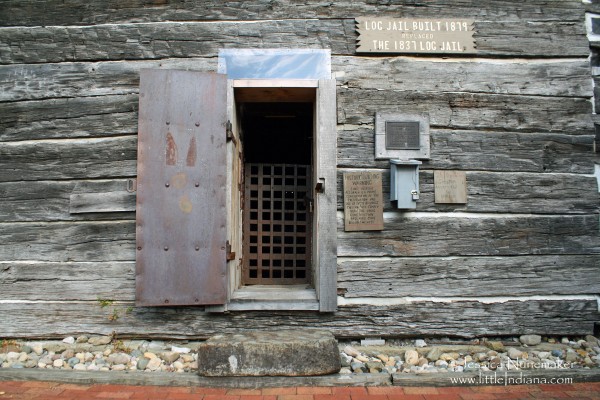 My information is gleaned from the wall poster inside. The first log cabin was, shall we say, maybe a little much for this Indiana town? Who, exactly was this jail expected to hold? It was obviously built to keep in the most hardened of criminals.

Two layers of 18″ log walls, with an outer, horizontally-laid layer, and an inner, vertically-laid layer composed the two-roomed, two-story structure. Apparently, in this escape-proof jail, the only way in was through the ceiling!

For the bad guy sentenced to spending a bit of time to cool his heels in this Brown County jail, the way inside was accomplished by a rope. The criminal would sit inside a door in the upper level floor via rope. Officials would pull the rope back up, leaving the bad guy behind. I can’t even imagine. What a production that must have been. It makes me wonder if the seal held or did it drip water into the room below when it rained?

A few years before the present structure was built, another layer of logs was needed. The walls measured a whopping 54″ thick. There is just no getting out of that one.

But it wasn’t enough, I guess. The old jail was in need of serious repair and for $1500 bucks in 1879, a new jail, the present building, was built. Now this is a unique piece of Indiana history.

This time around? The walls were built extra thick, with two layers–one foot apart from each other, the middle using horizontal logs!

Inside, you’ll notice the Dutch doors. You know, the doors that are split in half, so in  the case of the jail, the top could be opened in order to pass the prisoner more firewood and other essentials. This time, men had the bottom room and women were put in the top level.

Take a peek inside the old jail and check out the stark decor. They ask for donations to keep it in shape. Please look for the box and do your part.

The stairs may take you up, but we were unable to peek in the upstairs room that once held female prisoners. The door to the Nashville, Indiana jail was closed and locked, unfortunately.