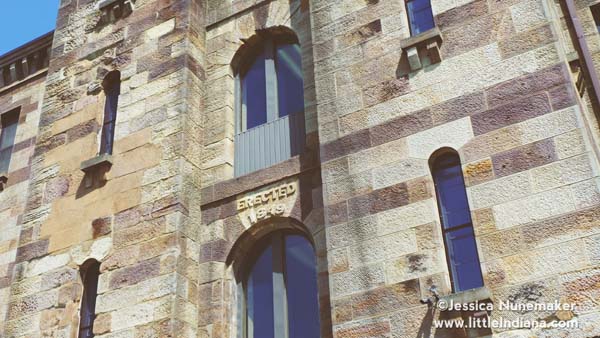 Today’s building, that beauty you see above, is the Indiana Cotton Mill in Cannelton, Indiana. Once, not so long ago, it was the most endangered historic building on the Indiana Landmark’s list. Those days are long gone! 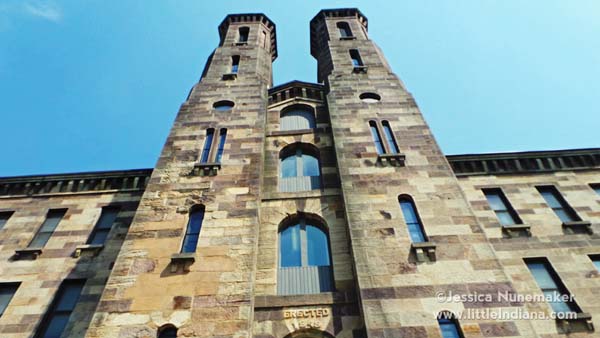 Cotton mills were big business. Hamilton Smith (1804-1875) had a vision: he would build a cotton mill here in this southern Indiana town that would make the New England towns weep. Northern Industrialists and Southern landowners chipped in for the building of the 1849 cotton mill. Built of sandstone, it took until 1851 to complete the hulking building. It’s two towers rose a towering 100 feet into the air. The tower on one side was a fire escape while the other side was used for water storage and fire protection, an important thing to have in a cotton mill!

A severe building, it is a commanding, intimidating presence. Designed by architect Thomas Alexander Tefft, one of his few projects outside of Rhode Island, it is interesting to note that his original plans were not for such a building. He had included dormers and other flourishes to make a more attractive, dare I say welcoming building. For whatever reason, they were dropped from the final plan.

For a time, it held the title of largest industrial building west of the Allegheny Mountains! Funny that it was located in the town of Cannelton, population just above 1500 (as of the 2013 census). 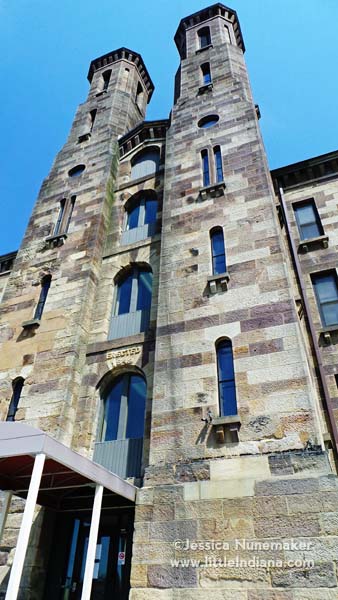 Hamilton Smith’s plan was simple: rather than relying on hydropower, he would use the readily available coal to run steam-powered machinery. For Cannelton, in case you didn’t know, was named for the type of coal readily available in the area: Cannel Coal! An overwhelming task, he passed the building along to two brothers,  Dwight Newcomb (1820–1892) and Horatio Dalton Newcomb (1809–1874).

In its early days, it employed somewhere around 400 workers, mostly women and girls. A staggering 200,000 pounds of cotton batting were churned out per year. That’s not even the most jaw-dropping figure: four million yards of cotton sheeting were also produced annually. Wrap your head around those numbers for a minute!

Although it seemed like the mill could have been well on its way to cotton mill super stardom, history buffs can probably imagine what happened next: Civil War. The north and south would not be working together. The Indiana Cotton Mill would not  become a new cotton center.

But that wasn’t the end of the Indiana Cotton Mill story! The mill did make uniforms for Union soldiers and uniforms for later wars as well, like World Wars I and II.

Even in the 1900s the mill was busy. Records show that in 1900, there were thirty-five girls and nineteen boys employed by the mill–all of whom were under the age of eighteen!

End of an Era 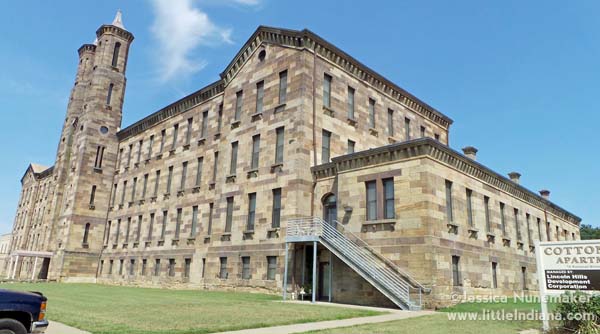 It couldn’t last. The mill ceased operation in 1954. As I understand it, the building sat vacant. It was placed on the National Register of Historic Places in 1975 and later became a National Historic Landmark in 1991. In sore shape, you may recall from the beginning of this article that it became the #1 endangered industrial site.

By 1998, active citizens that recognized what they possessed and didn’t want to watch the old mill completely fall into pieces got to work. They began figuring out ways to keep the building from becoming a thing of the past.

The Lincoln Hills Development Program purchased the property in 1999. Completely renovating the building for three years, it was turned into seventy low-income apartments.

Our historic buildings are always worth saving. The key is finding a new, appropriate purpose for them! Stop by Indiana Cotton Mill in Cannelton, Indiana for an interesting peek at the past. Please call ahead to schedule a tour.