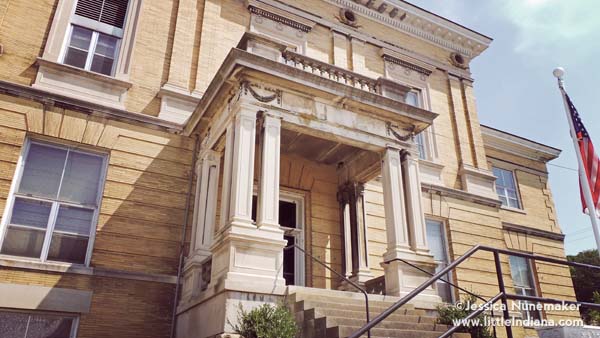 County courthouses are always worth a look, especially when they have been converted from courthouse to museum as is the case with the Perry County Old Courthouse Museum in Cannelton, Indiana.

Up on a hill, this is a beautiful Italian renaissance building. I couldn’t wait to get inside the Perry County Old Courthouse Museum and learn more about this Ohio river town. 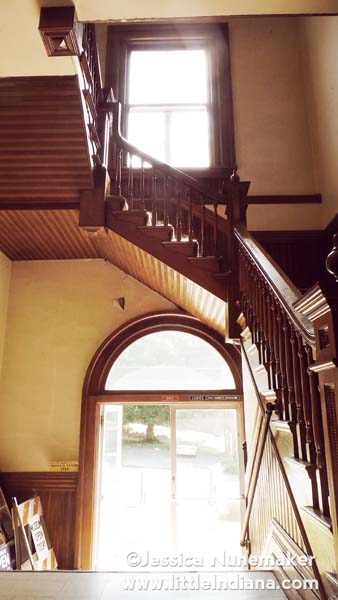 A striking yellow brick building, there are sharp Bedford limestone touches. Bedford limestone, in case you didn’t know, is coal extracted from southern Indiana between Bedford and Bloomington. Sometimes called Salem limestone, it is also the best quality in the United States.! Most of our courthouses made use of limestone. It was a very popular building material (until the discovery of acid rain). In 1971, the Indiana General Assembly declared it our state stone. I guess we’ve got official “state” everything.

Anyway, the locals wanted a chance to do it right because the first Perry County Courthouse was actually a home! The county seat was moved from Rome, Indiana to Cannelton. Rome is an unincorporated town. Interestingly enough, the courthouse in Rome was built to resemble the 1819 Indiana Capitol in Corydon.

So, how did this town located within the Hoosier National Forest, become the county seat? Way back when, it was a bustling, central point. Remember–this is a river town. River access was key to its growth. But why did the Rome, Indiana courthouse move? That’s an easy enough answer. Boundaries changed in 1859 and Cannelton was deemed the better locale.

It was such a quick move that the courthouse documents were stored in a schoolhouse turned courthouse!

Figuring out what happened next hasn’t been easy though I did get confirmation about the school turned courthouse from Perry County Museum board President Brandi Hess (and she certainly knows her stuff). It looks as though a school was renovated to make it suitable for the new courthouse. It was used from 1859 –1897. Brandi Hess pointed out that it was a two-story school located on 6th street, what locals call the “Old Gym.” Barges floated the records from Rome to the Cannelton school turned courthouse. She shared that in 1893, a large crowd was watching a trial when the floor shifted! That’s when they realized that had better start planning.

Not everyone was happy about the new courthouse construction! Some residents in Tell City felt that they should be the county seat. Brandi Hess mentions that they were more populated than Cannelton and would end up footing half the bill. In an attempt to snag the seat away from Cannelton, Mayor A.P. Fenn of Tell City got to work. They began constructing a courthouse of their own.

According to Hess, Tell City broke ground in March of 1896. Cannelton wasn’t going to give up! Four months later they followed suit. June 10, 1897, the county commissioners were given a petition from Tell City offering up the incomplete building for $1.00. So, too did Cannelton. That same day they made a deed to the county for a courthouse. They price? Also $1.00.

You won’t believe what happened next! Brandi Hess said:

Cannelton secretly planned to move the records from the Sixth Street building to the new one as soon as the office areas were sufficiently finished to permit it.  Having gotten wind of the plan, a Tell City official traveled to Boonville, (the residence of the circuit judge) for a restraining order to prevent removal the records. John Scull, from Tell City, was a county commissioner in Cannelton that day and, smelling a rat, lingered for a while after the close of business that day. He finally walked home to Tell City.  After he passed beyond the hill below town, hand signal was relayed to the fire station to ring the bell. About 350 citizens rushed to the center of town and started carrying records as a train to the new building. After everything was moved the town celebrated with a bonfire that night.

The next day, a restraining order arrived to try to keep Cannelton from pulling such a move but it was too late for Tell City. Cannelton used the yellow brick courthouse until 1994 when Tell City captured the county seat. As for Mayor Fenn? Hess is convinced that he was happy with this ending. After all, if Tell City had won, they wouldn’t have had a city hall. The courthouse only cost them $1.00, instead of the original $30,000, and the city hall came in at $24,000–it’s a nice city hall to boot. Now that’s a bargain.

It was the first switching of county seats in Indiana since English, Indiana became the seat of Crawford County in 1896. 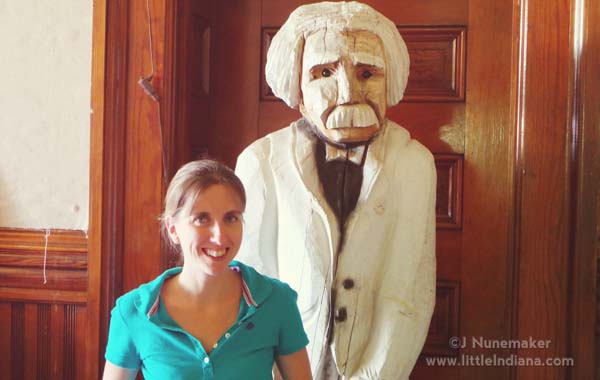 Perry County history abounds. Tell City refused to let go. In the 1970s, then the 1980s, and again in the 1990s, Tell City residents wanted to use donated land to build a new courthouse rather than fix the beautiful, already existing building in Cannelton. Although Cannelton fought hard against that one, they lost the battle. The new Perry County Courthouse was built in 1992 and opened its doors in 1994.

As an outsider looking in, it is easy to think that the loss of the courthouse was a devastating blow economy-wise, that it was what ended a thriving downtown. Living near a courthouse as I currently do, I know that the businesses along our square benefit from close proximity to the courthouse, gaining business from “the suits” and anyone else who happens to be utilizing the courthouse services and decides to shop or dine. Unfortunately, it sounds as though Cannelton has had several large business closures that have resulted in job loss over the years. The town was already hurting so the courthouse relocation didn’t have as much of an impact as you may think.

I can see the appeal of having the City Hall and County Courthouse in close proximity from Tell City’s point of view, but I believe a historic building such as the Perry County Old Courthouse Museum is always worth saving. They just don’t make them like they used to. I am, however, very glad to see the old courthouse in use as a museum and not just left to rot. I only hope that they are able to raise the money needed in order to make the necessary repairs to the structure and also put in place the correct fixtures to prevent the fading and deterioration of these important historic items.

Special thanks to Brandi Hess for the tour of the Perry County Old Courthouse Museum and Cannelton history! She needs clones. Every small town could use her passion, insight, and forward-thinking.