Cinnamon Rolls: No Rising and No Yeast Recipe

Home/Eat, Little Towns, Recipes/Cinnamon Rolls: No Rising and No Yeast Recipe
Previous Next

Cinnamon Rolls: No Rising and No Yeast Recipe 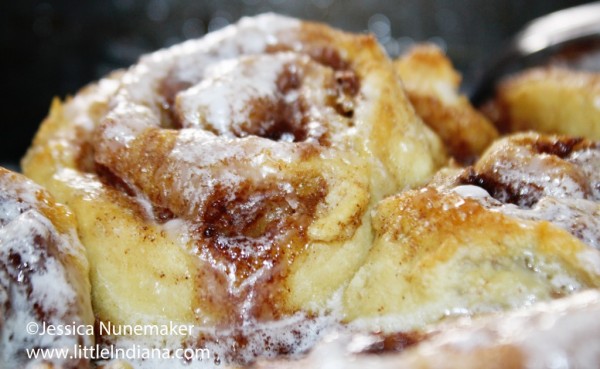 There’s no better way to start the weekend right than this quick recipe for No Yeast Cinnamon Rolls. Fresh and warm from the oven, well, it’s a great way to ease into this cooler weather. Not that I’m happy about cooler weather. Sure, it’s nice to bake any time of day, instead of limiting myself during the early morning or late night hours so as to avoid heating up the house.

It’s fun knowing we will go back to all the heavy Italian foods I love and stick-to-your-ribs comfort meals like my slow cooker chicken and dumplings recipe too. You can keep your pumpkin-everything, your boots, sweaters, and winter coats. This is Indiana, after all. Our fall doesn’t line up with our idea of fall. It isn’t the perfect, sunny, mild season we want it to be. How can I say goodbye to summer? Warm weather, bicycle rides, the kids playing in the yard, tomatoes warm from the sun, and our seasonal farmer’s market will all be over before I know it. I’m in mourning so I suppose there’s no better way to snap out of it than to remind myself that oven-loving recipes like this will make their way back into the rotation.

We usually have baked goods throughout the week: muffins, waffles, pancakes, you name it, I probably make it. Whenever I can, I involve the kid too. We like warm breakfast foods, or at least foods other than cereal. That’s just boring. The problem? I sometimes wait until the last minute. Some mornings are like that, though. But what do you do when you want a cinnamon-filled, buttery-delicious, icing topped cinnamon roll but can’t fit it into your day? There isn’t enough time to do everything. I know. Having to wait hours before getting to eat the typical cinnamon roll just doesn’t work sometimes. There are hungry mouths to feed! Enter these awesome cinnamon rolls. They will be your new BFF. You will wonder how you lived without them.

They have all the flavor of your traditional cinnamon roll but without the long rise time. They don’t use yeast so you don’t even need to worry about letting them rise and planning out your morning around them. It’s freeing, don’t you think? Instead, you’ll use baking powder as the leavening agent. It will result in puffy rolls. Do grease your pans very well or line them in parchment paper to avoid sticking.

These rank high on the list with my husband, Jeremy, and the kid, too. In fact, our son asks for them by name. He really enjoyed them! The fact that they don’t use yeast and so don’t require any rising time is just an awesome bonus. Now you can have cinnamon rolls whenever you want, without the long wait. When you have the time, though, I do have a very good recipe for traditional Cinnamon Rolls. I found this great recipe at Still Waters Blog.

No Rising and No Yeast Cinnamon Rolls Recipe

Cinnamon Rolls: No Rising and No Yeast

bread recipe,
jessica nunemaker
© 2023 Photos are the Property of little Indiana. Do Not Use Without Permission.
http://littleindiana.com/2010/10/cinnamon-rolls-no-rising-yeast/