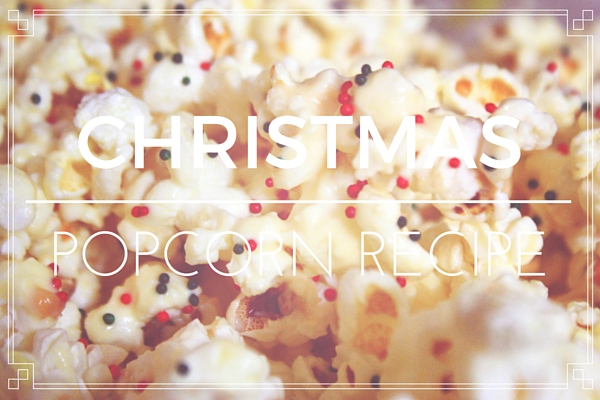 Does anything complement the festivity of the season more than this easy Christmas Popcorn recipe? Popcorn gets a holiday treatment with white chocolate, a dash of salt, and a light dusting of Red and Green Christmas-colored sprinkles!

Ever since I began making this recipe for Christmas popcorn, it has become a holiday tradition. Year after year, the day after Thanksgiving brings the first holiday movie of the season accompanied by a big bowl of this satisfying snack.

As long as you remember that white chocolate can harden if left unattended, you won’t have any difficulty in making this tasty treat. I prefer to make my popcorn using kernels in a pot on the stove. Of course, any popped corn will work, but no other preparation method compares to the flavor of stove-top popcorn.

Don’t limit yourself to Christmas, either. It’s easy to transform “Christmas popcorn” into “Halloween Popcorn” by switching out the red and green Nonpareil Sprinkles with purple, orange, and black. Or, make “Valentine’s Day popcorn” with pink and red sprinkles, and on and on. Really, it’s so easy, feeds a group, yet can be scaled down for just a few that it is a wonderful addition to any celebration all year long. 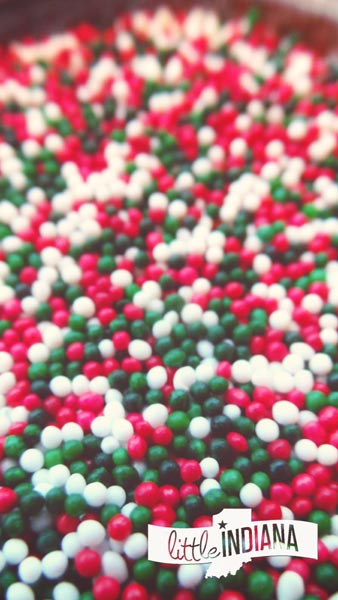 National Geographic reveals that a 2012 popcorn find, at the Paredones and Huaca Prieta archaeological sites on Peru’s northern coast, showed that popcorn is roughly 2,000 years older than previously believed. The Smithsonian stated that the popcorn is roughly 6,700 to 3,000 years old. What’s more, it was also diverse. The arid climate preserved the cobs, which varied in size with different colored kernels. Even then, farmers were working with their plants to see what they could do.

What’s especially interesting, is that corn was first developed in Mexico 9,000 years ago. Just think how people shared, shared, and shared some more, spreading not only their ideas, but their favorite snacks. It’s not much different from the way we share recipes today, is it?

So, even though popcorn has been discovered in ancient ruins, having first been created in Mexico, the United States leads in its production, development, and use, so says the Agricultural Marketing Resource Center (AMRC). Popular tales speak of Squanto sharing popcorn with the Pilgrims. Although that isn’t true–it was the Iroquois Native American tribe who first popped corn, History.com speculates that New York, Quebec, and Vermont settlers were probably the first “European-American popcorn makers.”

Early settlers used popcorn as a cereal, serving it with milk or cream. Victorians made popcorn balls as festive home decor during the holiday season. By the mid 1800s, it was a popular evening snack. Easy to grow, and filling, it didn’t take a lot of time to prepare. No wonder the busy families of the day embraced popping corn.

An 1840 recipe declares the proper way to make popcorn. PBS.org shares that “One of the earliest recipes for popping corn came from Daniel Browne during the 1840s. His method required one to “Take a grill, a half pint, or more of Valparaiso or Pop Corn, and put in a frying-pan, slightly buttered, or rubbed with lard. Hold the pan over a fire so as constantly to stir or shake the corn within, and in a few minutes each kernel will pop, or turn inside out.”

PBS also points out that “Prestigious literary magazines like New York’s Knickerbocker and the Yale Literary Magazine began referencing popcorn. By 1848, the word “popcorn” was included in John Russell Bartlett’s Dictionary of Americanisms.” Popcorn gained in approval. Chicagoan, Charles Cretors, built the first popcorn machine in the 1890s? His horse-drawn popcorn machine let non-farmers in on the delicious snack. Cracker Jack was another 1890s creation.

Movie theaters, however, were still popcorn-less. It wasn’t until the Great Depression when the snack become readily available. Where once hawkers sold their wares in the aisles or outside, movie theaters were now installing their own popcorn poppers and venting fans, to reduce any smokiness. It was an easy indulgence for folks without a lot of money to burn. 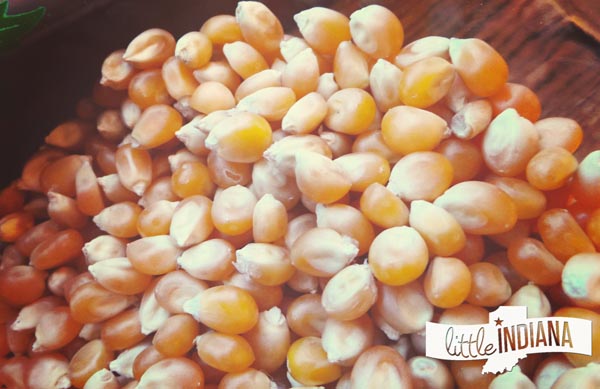 Popcorn hasn’t lost its appeal, either. General Mills applied for the first patent for a bag of microwave popcorn in 1981, shares Popcorn.org, and suddenly everyone was popping corn. The Agricultural Marketing Resource Center (AMRC) also shares, ” Domestic popcorn demand peaked in the early 1990s and has remained relatively steady since. U.S. per capita consumption averages 52 quarts of popped popcorn per year. For nearly 20 years starting in 1970, popcorn sales increased 2% to 8% annually.” History.org awes with this little fact, “Americans eat about a million pounds worth of (unpopped) popcorn a year.” That’s a lot of popcorn.

We eat 70% in the home (home popped and pre-popped) and about 30% outside the home (theaters, stadiums, schools, etc.), says Popcorn.org. Twenty-five states are in on popcorn production. Nebraska and Indiana (not surprisingly) rank among the top. I know I make popcorn at least once a week during the Fall and Winter. You can bet that I dress it up a little, too.

Really, those numbers make a lot of sense when you really think about popcorn’s versatility. Who hasn’t strung together popcorn for a school craft or as a festive bird food as a kid? When it comes to flavors, well, I’ve also made Cinnamon Popcorn and my now world-famous Caramel Popcorn recipe, a favorite snack in my neighborhood.

It’s quick, simple, and let’s you get out of the kitchen and enjoy the fun. A hit with kids and adults–and makes a great gift when combined with cute packaging. Pour it into a Chinese take-out box (you can often purchase them from the mom and pop restaurant in your town or city) or place it inside a nice bowl you plan to gift. Add an adorable tag–and there you go! An edible gift that no one will turn down.

This is not my recipe. It's been making the rounds on the web again recently but I do not know where it came from. 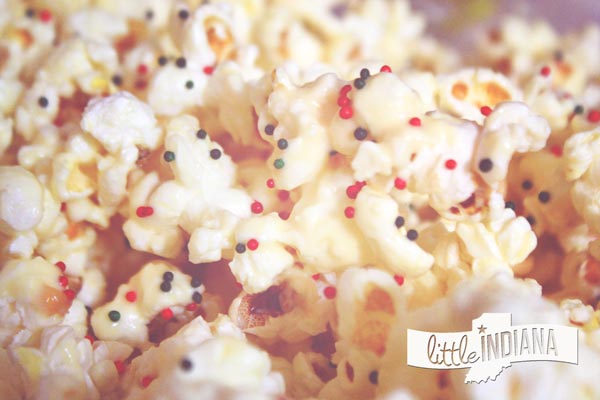 © 2021 Photos are the Property of little Indiana. Do Not Use Without Permission.