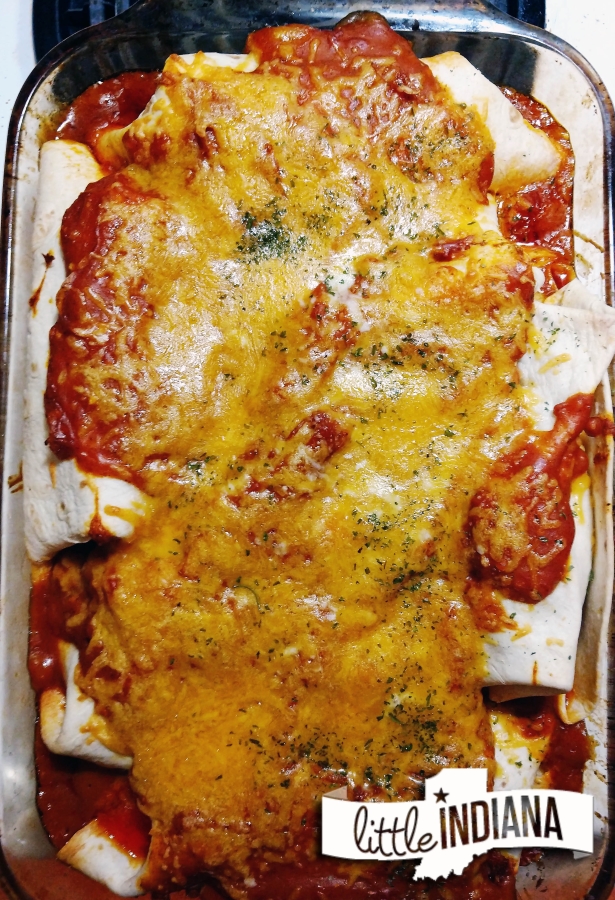 You don’t need to fold up the ends of the enchiladas. Fold them or stack them, the choice is yours. If you leave your ends open, it may allow a little of that delicious homemade enchilada sauce to sneak in.

Welcome the family home with this incredible ground beef enchiladas recipe. With its meaty filling, savory sauce, and plenty of cheesy goodness, it’s a dinner recipe to remember.

If you have always wanted to be able to make a Mexican dish at home, but didn’t think you could handle it, start here with this Mexican recipe.

If you can measure and combine ingredients, stir a sauce, and fill a soft tortilla, you can handle this too.

When I share a recipe with you, I like to know the story behind the recipe. For example,

What’s the Difference Between Enchiladas and Burritos?

For starters, you won’t use your hands to eat an enchilada.

The main difference between enchiladas and burritos are all in the preparation.

General internet consensus appears to agree that it isn’t so much whether a corn or flour tortilla is used, or even whether it is stacked or rolled, but whether or not the tortilla was baked or fried and if a sauce was included during baking or added afterward.

Of course, there are some who possess strong opinions, and who believe an enchilada is made from corn tortillas, but for the most part, it’s more about how the dish is made than what it is made with.

If a tortilla has been filled, folded, sits in sauce, is topped with sauce, and then baked, it receives enchiladas status.

If a tortilla is filled, folded, baked, and served with something on top, it’s a burrito. If the red sauce is poured on after the burrito is baked (and likely topped with cheese), it’s a wet burrito.

If it has been filled, folded, and then fried, it’s a chimichanga. If the corn tortilla is filled and tightly wrapped, then fried, you have the makings of one of my favorite recipes: flautas. My favorite homemade recipe for flautas, however, is baked.

Enchiladas: Tex-Mex Cuisine as of 1972 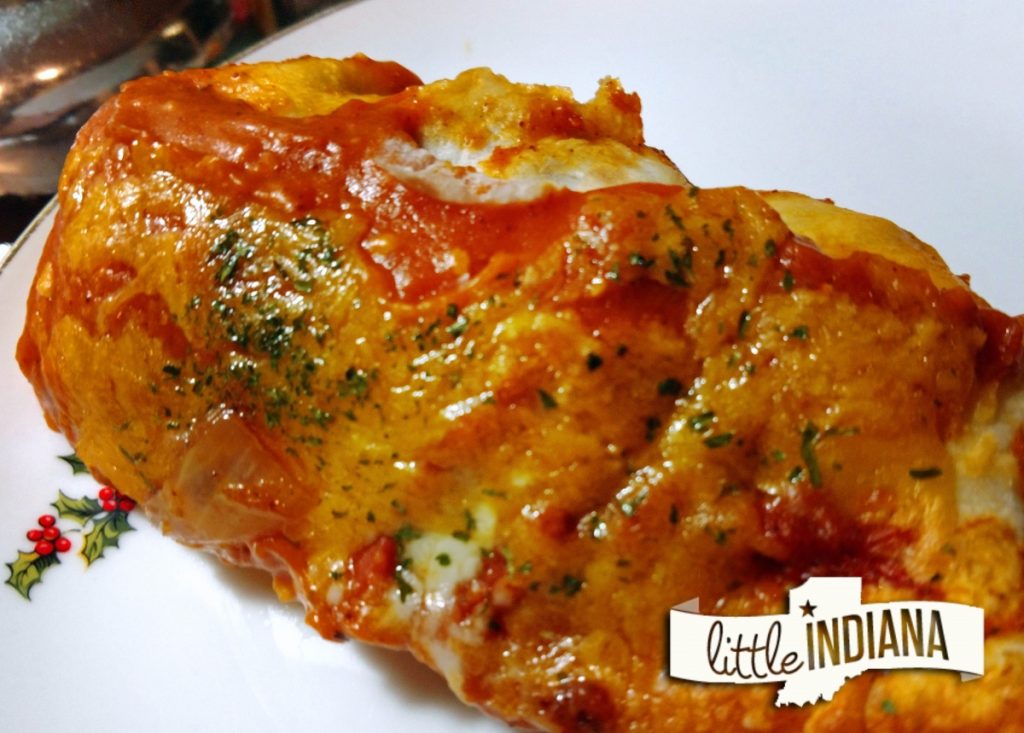 Craving Mexican food? This recipe for homemade ground beef enchiladas is so amazing you won’t believe it. This is going on our favorite recipe rotation.

Interestingly enough, finding the answers to some of those questions from reputable websites has proven tricky. I had expected plenty of info out there regarding the history of the enchilada.

It took quite a bit of digging, but I did uncover some interesting facts regarding the enchilada, like its origin, its shift from Mexican cuisine to Tex-Mex cuisine, and the impact Diana Kennedy made on documenting Mexican food–and changing the status of the enchilada, and other foods of its ilk, forever.

That may be a bit dramatic, but let’s begin at the beginning. According to Dining Chicago, “the word enchilada derives from Spanish enchilar, “to season with chili.”

Enchiladas, it is believed, were first whipped up by the Mayans, stated Dining Chicago.

“…Enchiladas originated in Mexico, specifically from the lake region of the Valley of Mexico. The indigenous people of this area began a tradition of wrapping fish in small corn tortillas while, we imagine, wishing for a Corona.”

You know the cumin and garlic found in enchiladas and many other Mexican foods? That’s actually a Moroccan influence from the 1500s.

Here’s an interesting tidbit from History.com:

“…when the Spanish brought workers of Moroccan descent from the Canary Islands to their settlements in the San Antonio region. As a result, Moroccan cooking, with its heavy use of cumin and garlic, became part of the complex and interesting history of Tex-Mex cuisine.”

The general consensus is that the first mention of enchiladas made its way into the first cookbook printed in Mexico, El Cocinero Mexicano, which translates to The Mexican Chef. 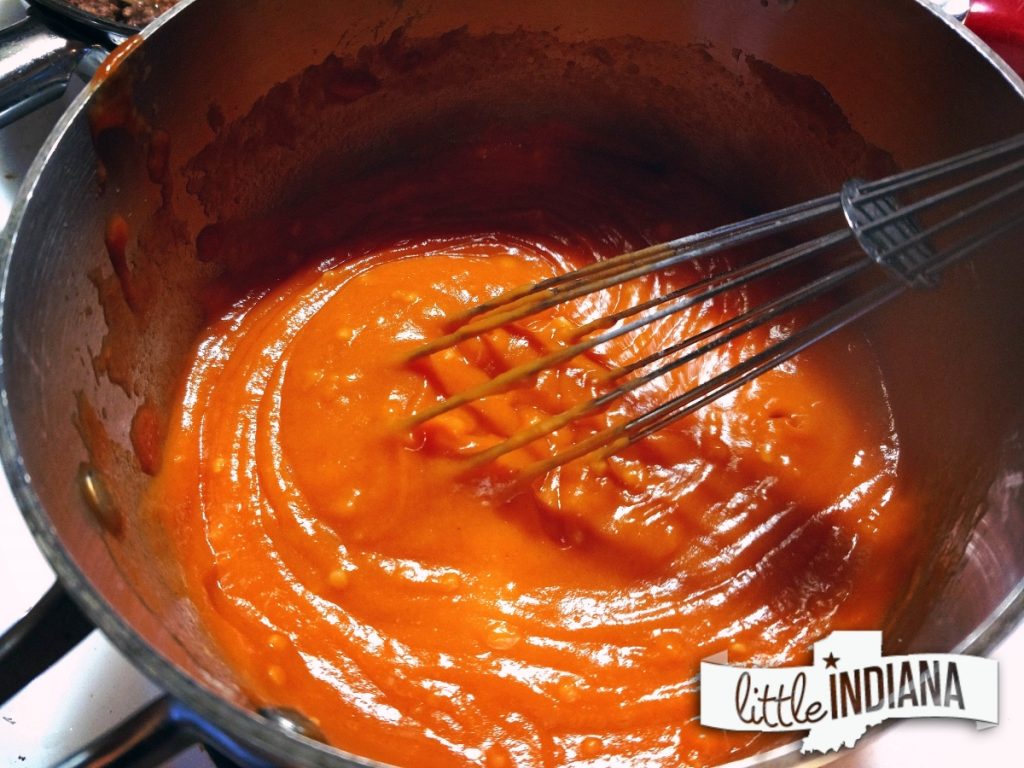 Make your own enchilada sauce. It is the perfect compliment to the ground beef-filled enchiladas.

During my research, I learned that Tex-Mex cooking is the proper term for everything that occurs north of the border.

Yes, Tex-Mex is the appropriate terms for what those of us in the United States has done to Mexican food.

That wasn’t always the case. Back in 1972, again from History.com, Diana Kennedy drew the line between what she counted as authentic Mexican cuisine and what became known as Tex-Mex cooking–those dishes that are created here in the US.

It happened with the release of Diana’s first cookbook, (affiliate link. I receive a small commission for sales) Cuisines of Mexico

At the time, it was a big deal. Some chefs and cooks were offended at the division, especially since these foods, like nachos, originated in Mexico. But the term “Tex-Mex” spiraled into its own separate category of cuisine that we use today.

Who is Diana Kennedy and why did her opinion matter?

Diana Kennedy (3/3/1923) is frequently referred to as the “Julia Child of Mexican Cuisine” or the “Grande Dame of Mexican cooking.”

Paul and Diana headed to Mexico together that same year. She became deeply interested in the food, joining him on his trips around the country when she could, or having him write recipes down for her when she couldn’t.

Much like today, people weren’t writing down their family recipes. Diana felt the need to document these recipes and learn the techniques from the source. 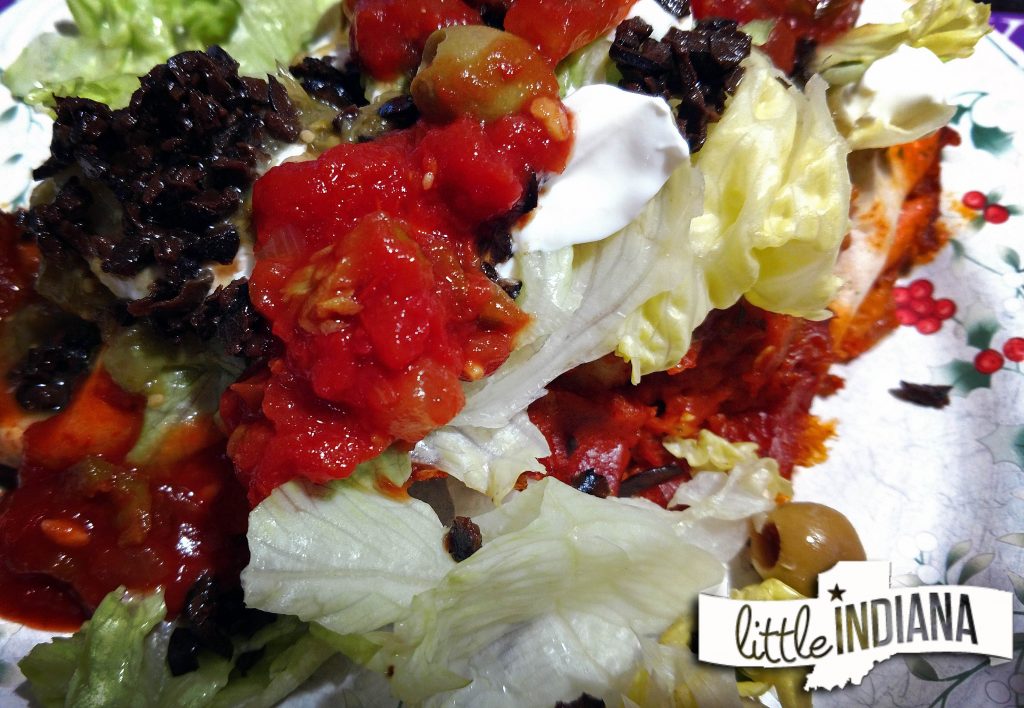 I’m all about layering my enchiladas with anything and everything. Lettuce, olives (green and black), sour cream, red salsa, green salsa, and whatever else I can dig out of the pantry or find in the fridge.

Sadly, Paul passed away ten years into their marriage. They had only been in New York for a year.

Diana needed a job. The Times food editor, Craig Claiborne snagged her a position to teach classes on Mexican cooking in New York. Is that a perfect fit or what? An editor approached Diana and asked her to turn her classes into a book.

And that is when Diana wrote her first book, “The Cuisines of Mexico” in 1972, where, with a few typewriter strokes (her preferred method of writing books for many years), she changed the way people thought about Mexican and Tex-Mex cuisine.

These books are more than simple cookbooks. They include techniques, commentary on the importance of the quality of ingredients, and the stories behind the recipes.

At the time of this writing, Diana Kennedy is almost 95 years old, has more than ten cookbooks on Mexican food behind her, the last book a 2013 reissue of her popular My Mexico: A Culinary Odyssey with Recipes (The William and Bettye Nowlin Series in Art, History, and Culture of the Western Hemisphere)

“I never travel in straight lines,’ she says. ‘The important discoveries in my life have always happened by chance.”

One spontaneous trip to Haiti changed her life.

Prince Charles dined at her Michoacán home when he awarded her the Member of the Most Excellent Order of the British Empire (MBE).

Let’s get on with your dinner discoveries. It’s time to make magic in the kitchen, Tex-Mex style, with this homemade enchiladas recipe from Taste of Home.

This isn’t authentic Mexican cuisine. This is Tex-Mex at its finest. If you prefer corn tortillas, go with it. If you want to play with the sauce, do it. Want firmer tortillas? Cook them for a little bit first or go with corn tortillas. Watching your salt? Buy low sodium canned items. Want more kick? Add in a small can of green chilies. Want a thinner scratch-made enchilada sauce? Use less flour.

Your kitchen, your taste, your rules. 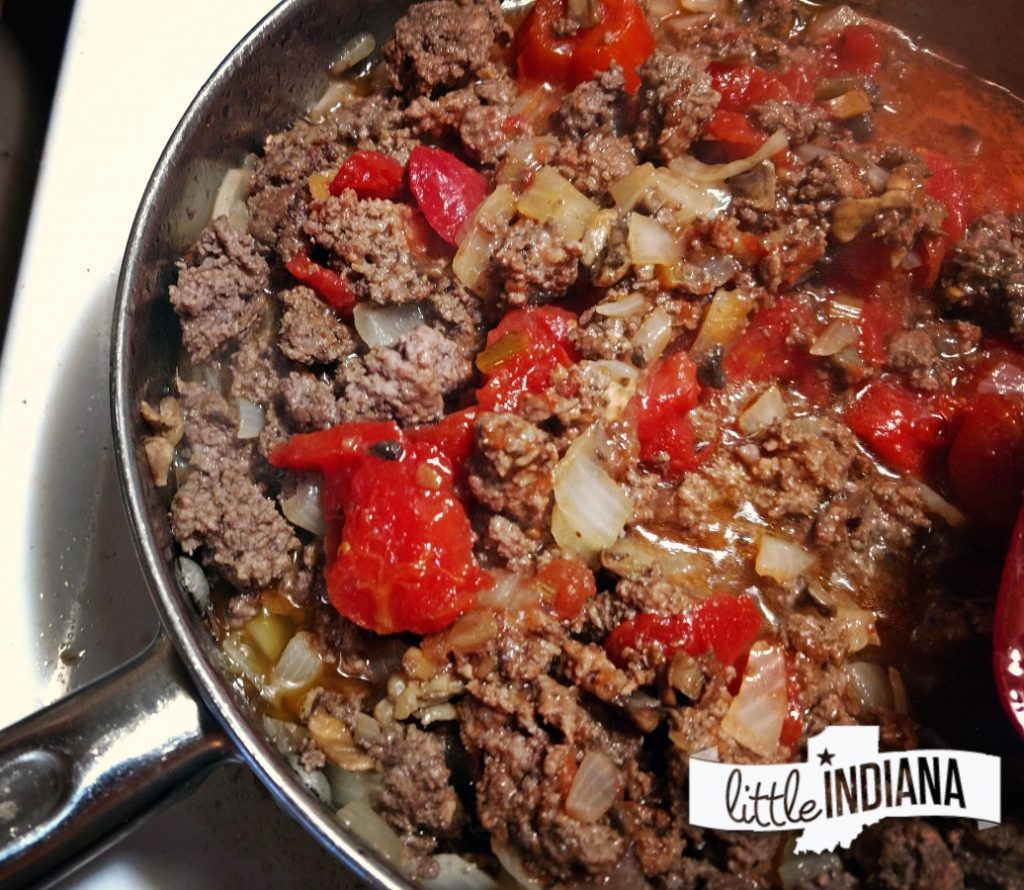 Ground beef, onions, and stewed tomatoes sizzle in the pan. After the addition of a few seasonings, this becomes the delicious filling for homemade enchiladas.

by Jessica Nunemaker
Category Eat Recipes
You don't need to fold up the ends of the enchiladas. In fact, you shouldn't, so that sauce can get in there a little bit too. I did, albeit not well, because I just wasn't thinking about it, but the ends should be left open.
Persons
5
Prep Time
30 minutes
Cook Time
40 minutes

I was out of beef bouillon to make broth. I substituted with the tiny bit of vegetable bouillon I had left. Yes, these were still excellent.

mexican cuisine
© 2023 Photos are the Property of little Indiana. Do Not Use Without Permission.
http://littleindiana.com/2018/02/beef-enchiladas/

In my opinion, the only way to eat an enchilada is to layer it.

I believe that’s the key to anything you order at a Mexican restaurant. You need the extra stuff. In our home, the extra stuff isn’t necessarily traditional, but that’s okay. I’m not exactly serving the Queen.

There is no wrong answer.

I am quite positive, however, that Diana Kennedy would disagree.